Argan oil is a great multitasking super-moisturizer that works beauty wonders! Here’s how to use organic argan oil for lips instead of traditional lip balm. 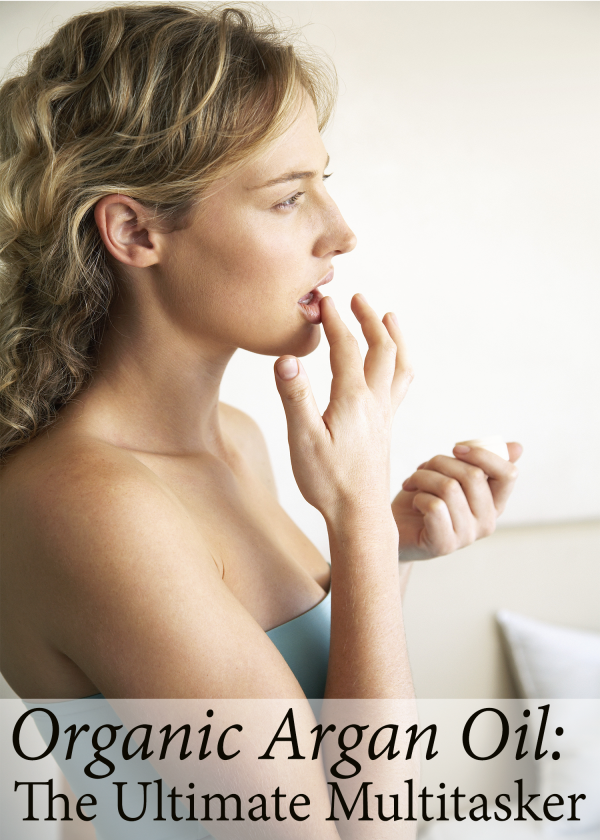 I started experimenting with organic argan oil about a month ago when I heard about all the great health benefits it had. I’m always interested in trying new natural beauty products, but I was especially excited because of all the potential uses of argan oil. This is the one that I’ve been using, and there are lots of other options out there for finding organic argan oil. Try natural food stores or online.

First off, argan oil comes from the seeds of the argan tree, which is native to Morocco. Nowadays it’s mostly known for its many health and beauty uses, but it’s also still widely used for cooking! (See, I told you it was a potent multitasker!)

I tried it as a body moisturizer, and then for hands/nails/cuticles/feet, and was not disappointed by the outcome of either! This week, I decided to try it out as a lip balm!

Now, at first I was a little wary of trying organic argan oil for lips, but I loved the idea of a non-toxic beauty product that I could use on my lips instead of a potentially chemical-laden lipstick.

Overall, I was pretty impressed! My biggest complaint is that it’s hard to get out just the right amount for such a small area without going overboard. I’ve had this issue before with argan oil- a little bit goes a long way, so just one drop it all you need for lips, and too much just gets messy! Although, I suppose any leftovers could just be used as a facial moisturizer.

My lips absorbed it fairly quickly, and I don’t really have an issue with dry or chapped lips so that was pretty impressive! It also lasted long enough- I only needed to reapply every two or three hours or so most of the time.

But it also depends what you’re looking for in a lip product. If you like that glossy, shiny look, you’re better off with something else! Organic argan oil absorbs too quickly to really give a noticeable sheen. But another great use for it would be to put it on before you add another lip product (your usual lipstick/gloss) so that your makeup goes on smoother and lasts longer. I tried it out this way too and it worked like a charm!

Bottom line: organic argan oil gets the job done when used as a lip balm. It moisturizes and absorbs quickly enough to where you won’t feel grossed out at having put oil on your lips. And it’s an all-natural product that you can feel good about when you put it on your skin!

[Photo of woman with lip balm from Shutterstock]