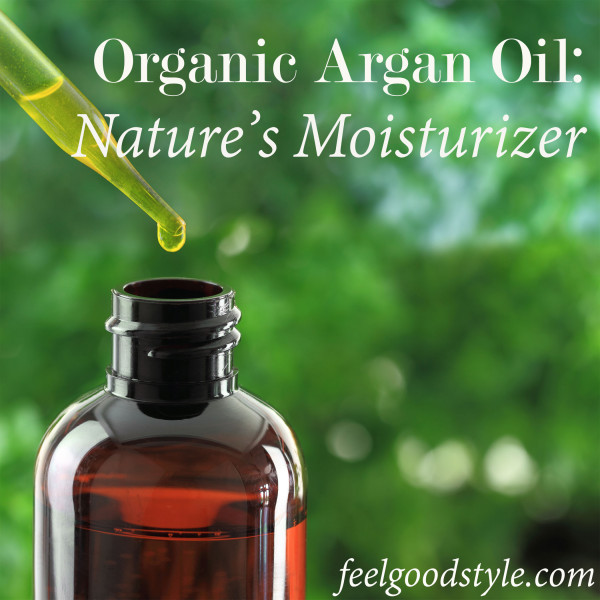 First of all- what is argan oil? It comes from the fruit of the argan tree, which is a native Moroccan plant. It’s used for food and beauty alike, as well as for medicinal purposes. Organic argan oil – like this one –  is from organically grown argan trees.

Now, as a gal with a greasy complexion, I was pretty disturbed at the idea of putting this organic argan oil on my skin as a moisturizer. But I recently tried the stuff in lieu of my usual lotion and was pleasantly surprised!

It’s important to know that a couple of drops really go a long way. So don’t go thinking you’ll use the same amount of oil that you would of your usual moisturizer!

I normally have to wait a little while in the morning between when I put on my moisturizer and when I put on my makeup, but not so with argan oil! One of the things I really liked about it was how quickly it absorbed into my skin. And no greasy residue either, which is pretty counter-intuitive considering it’s oil! You would think it would leave some sort of residue, but your skin will just soak it up as you rub it in.  And like I said, a little bit goes a long way!

I used it everywhere, too- face, hands, body, even rough spots on my heels and elbows. It definitely worked better and faster than my usual moisturizer.

A lot of people complain about the smell. But take it from me- it isn’t that bad. It smells kind of nutty, but even that smell goes away fairly quickly as you rub it in. Remember- you’re not using a huge amount of the stuff, so if the smell gets to you, just try using a little less!

Another idea would be to mix it with some other essential oils (like jojoba maybe) for some extra oomph (or if you still just can’t get over the scent!). I just used it plain- straight from the bottle- but my next experiment will definitely involve a DIY skin-saving essential oil mixture!