Organic argan oil has many practical uses, but one of the best is as a nail and cuticle moisturizer. 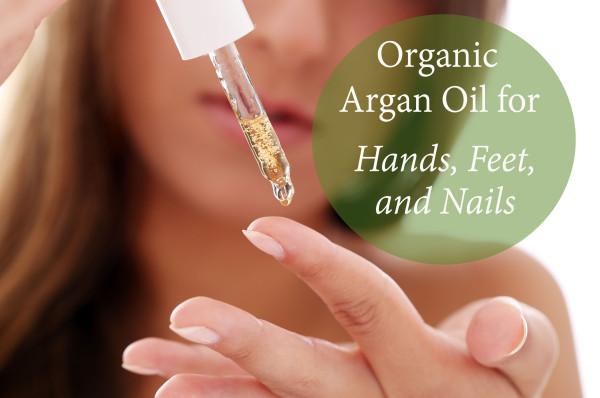 A couple of weeks ago, I started using organic argan oil as a moisturizer, and I was not disappointed! This week, I decided to use it on my hands, feet, and cuticles just so see how it did. And once again, I was pleasantly surprised! In fact, this might be one of my favorite uses of argan oil to date.

If you missed it in my earlier post, one of the most important things to remember about argan oil is that a little bit goes a long way! Just a couple of drops (at the most) for both hands will suffice. It may feel a bit oily at first, but just keep rubbing it in and your skin will absorb it pretty quickly.

For my nails, I applied organic argan oil like a nail tech would at a salon- just put tiny drops of it on each nail and rubbed it in. Just like on skin, it absorbed fairly quickly. Bonus: it also gives nails a healthy shine!

I also heard it makes a great foot moisturizer, so I put that to the test too! I applied at least 5 to 6 drops of it on each foot, which is way more than I would normally use, but the point was to put socks on over it and let it soak in overnight.

Now, I wasn’t disappointed with the results of this experiment, but I wasn’t overwhelmingly satisfied either. My feet were softer, but not any more so than they were when I’ve just used a normal moisturizer. Also, I may have used a bit too much argan oil this time around, because it still felt a little greasy in the morning.

All in all, I’ll still continue to use organic argan oil as a daily moisturizer. The stuff is potent! But the most important thing to remember is that a little bit goes a long way!

[Photo of woman with oil via Shutterstock]