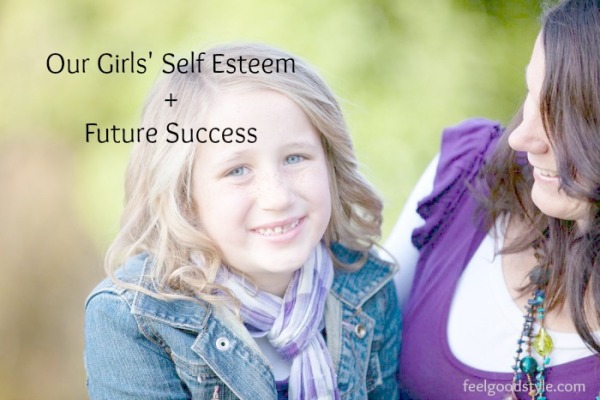 Nothing takes you back to your tween years like having a child in middle school. This time can be fun, with new found freedom and more things to do. It can also be fraught with greater responsibility and lower self esteem.

Yep, young girls (and getting younger all the time) are experiencing greater levels of anxiety, depression, and low self image than ever before. Whether due to the prevalence of social media or society’s distorted standards, the demand and desire to appear perfect are at an all time high.

As you can imagine, this has negative effects on our girls’ success and happiness. Many girls are taking anti-anxiety and anti-depressant medications now in high school. It has been shown that girls with poor self image have a lower grade point average and do poorly on tests. It goes without saying that they would be less willing to put themselves out there if they are feeling judged.

Women are not immune to this self image issue. As Meaghan Ramsey says in her TED Talk on the subject, this poor view of ourselves does not go away as we grow up. It just turns into women with horrible body images and lower self esteem, affecting their work, home, and social lives.

One story that really resonated with me, having a tween-aged daughter myself, was of a Denver teen who posted a video of herself on YouTube asking if she was ugly or pretty. This beautiful young girl received an overwhelming number of comments telling her how ugly she is. Unbelievable. I guess this is to be expected when you put a question out to lots of people with too much time on their hands and sensitivity issues.

Why would this girl do such a thing in the first place? Because, while she was told at home on a regular basis how pretty she is, she was being told every day at school how ugly she is. One look in the mirror shows there is absolutely nothing ugly about this girl. But kids can be mean and tend not to accept diversity. Maybe she had different style than the kids who were dissing her. Maybe she was smarter than them or in the “wrong” club. Maybe they were jealous or felt threatened by her in some way.

Maybe this happens to all kids at some point. There are thousands more with similar videos.

I don’t know. But what I do know is that we need to work on this. Meaghan offers three steps to supporting our girls in healthy body image and self esteem. One thing we can all work on is identifying people for their actions rather than their looks. It is easy to judge someone by a snippet on TV or social media, but we can not forget that these are real people, with feelings, a life, and people who love them. And putting them down in front of our kids causes them to question themselves.

Be ok with how you look so your daughter can mirror that. I am guilty of bitching about wrinkles on my face or a muffin top in front of my daughter, but I try very hard to talk about eating healthy, exercise and being ok with who you are. It’s not easy. But, as Meaghan says, we need to challenge the “status quo of how women are seen and talked about in our own circles”. This means at home, while you watch the tube, look at your social media, discuss people in your community.

First step, being good role models for our girls so that they can grow into healthy minded, successful women.