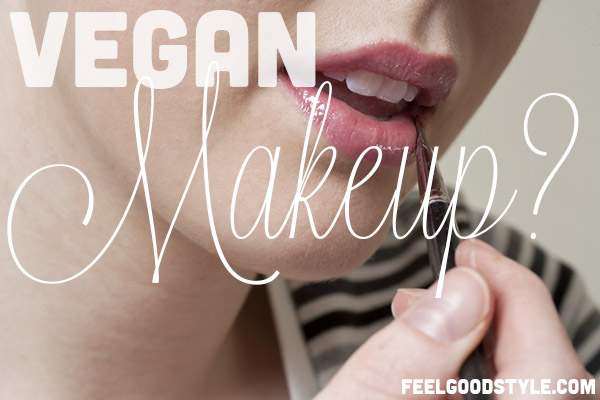 I have been talking a bit lately about vegan makeup and beauty supplies, and for folks that aren’t familiar with a vegan lifestyle, this might seem a little bit…well…strange, right? You don’t eat nail polish! So, what is vegan makeup, and who cares, anyway?

What does vegan really mean?

Veganism is more than a diet – it’s an entire lifestyle change based on the idea that animals shouldn’t have to suffer or die so that we can have the things that we want. That’s pretty straightforward when it comes to eating vegan. Animal products like meat, dairy, honey, and eggs are out. Plant-based foods like fruits, veggies, beans, and whole grains are in. Easy peasy. If you’re looking for vegan makeup, though, things can get a little bit dicey.

While there are definitely hidden animal ingredients in some foods, when it comes to finding vegan makeup, label-reading is even tougher. Some animal ingredients, like lanolin (made from sheep’s wool) or beeswax are pretty easy to remember and spot, but what about all of those polysyllabic ingredients on the label?

The other issue to keep in mind when you’re on the hunt for vegan makeup is animal testing. Even if your product is totally plant-based, if the company tests it on animals, it’s not a vegan product. Vegan products – whether we’re talking snacks or vegan makeup – do not harm animal directly or indirectly in any way.

The real kicker about animal testing is that it really doesn’t tell us that much about how a product is going to affect human users. Animal testing is so inconclusive, in fact, that the EU just banned the practice.

So, how do you find vegan makeup? Here are some options for ya:

3. Ask your favorite brand. Not sure if the brand you like is vegan? Contact them! They can tell you if they use animal ingredients and whether they test on animals. If they won’t tell you, you have to wonder what they’re hiding. Not only can you find answers by just asking, you’re also letting them know that their customer base wants vegan products. Companies want to make things that you want to buy, so tell them what you want!

Do you have a favorite line of vegan makeup? Tell us your faves in the comments!