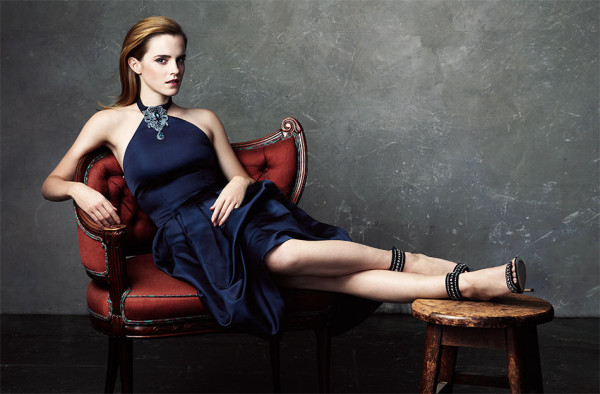 “Sustainable fashion is both beautiful and important” – Erdem, The Edit.

Watson’s personal values focus firmly on concepts such as Fair Trade, formed in large part by her upbringing as well as her studies at Brown University, Rhode Island. Her previous fashion collaborations reflect her ethical priorities. She worked with industry leader People Tree and co-designed and modelled three collections with them a few years ago. The next project she took on with Alberta Ferretti, called Pure Threads, signalled a move away from mid-market fashion towards designer led collaborations. As she stated in The Edit interview, her latest work modelling with the GCC satiated her desire for sustainable high fashion as it “…was something I had to do, something I was waiting for.” Watson has been a red carpet regular since her debut role as Hermione in the Harry Potter film series and she has often bemoaned the scarcity of sustainable style for her high-profile appearances.

“We don’t support slave labor in this country, so we shouldn’t support those conditions in other countries. I can’t wrap my head around why ethical clothing is a speciality and not a base standard. Why is it special to have something you know wasn’t made under terrible conditions?” – Emma Watson, The Edit.

It may be tempting to underestimate how significant celebrity and design led ethical and sustainable fashion will prove to be. One can hope that in the same way aesthetic trends tend to trickle down from the runway into the discount designs in mid-market shopping malls, ethics will also transcend the runway and lift the expectations of consumers and the entire fashion industry. One of the advantages of the celebritization of ethical and sustainable lifestyle is the distinct move towards aspiration. While campaigns led by organizations like Greenpeace are great on the issues, facts and calls to action, they have frequently fallen short on glamour.

Watson has raised awareness about the negative impacts and issues of injustice that plague the industry, but not without simultaneously showing how utterly beautiful fair fashion is today. For the uninformed, or unconvinced, consumer the emerging designer-celebrity collaborations may prove to be the difference between apathy and awareness. It is inconsequential that many of Watson’s fans will be unable to afford the beautiful dresses she models in The Edit, because she has expertly lifted up the conversation on ethical, sustainable fashion and likely reached a new audience. Well done, Watson.