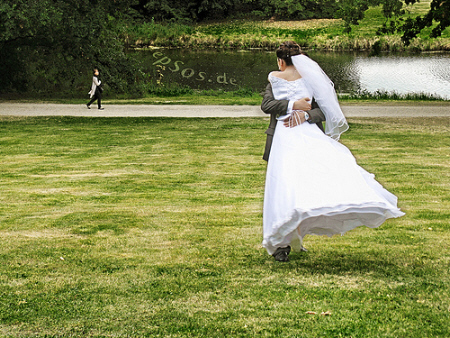 Just in case you’ve been totally off the grid in recent days, there’s a royal wedding on the horizon: Great Britain’s Prince William and long-time girlfriend Kate Middleton announced their engagement this week. While the royal family is already hinting that this wedding won’t be the extravaganza seen in 1981 when Prince Charles married Princess Diana, there’s no doubt this will be a big affair… with a big carbon footprint to accompany it.

I don’t want to rain on the young couple’s parade — they’re certainly due the celebration they choose. But as Charles has become one of the world’s leading proponents of the green movement (he’s even building William and Kate a “green mansion“), wedding plans that take environmental impacts into account seem fitting… and actually work well with the plans for something a bit lower key.

So,  as the Prince and Princess-to-be start their preparations, and staff starts shopping for invitations, flowers, and food, I’ll take the admittedly bold step of suggesting some ways to keep this royal wedding somewhat closer to the environmental impact we commoners might create.

A few ways Prince William and Kate can green their wedding…

Of course, there are other items that can be greened: the wedding dress and invitations come to mind (though these are more symbolic than substantive). Overall, though, Prince William and Kate have the opportunity to show the world that even a royal wedding doesn’t have to consume massive amounts of resources in order to be beautiful and meaningful.

Jeff McIntire-Strasburg is the founder and editor of sustainablog, a long-running green blog and eco shopping comparison engine, as well as the newly-launched OrganicGradeBMapleSyrup.net.

Image credit: epSos.de at Flickr under a Creative Commons license

Jeff McIntire-Strasburg is the founder and editor of blog.sustainablog.org. You can keep up with all of his writing at Facebook, and at Google+