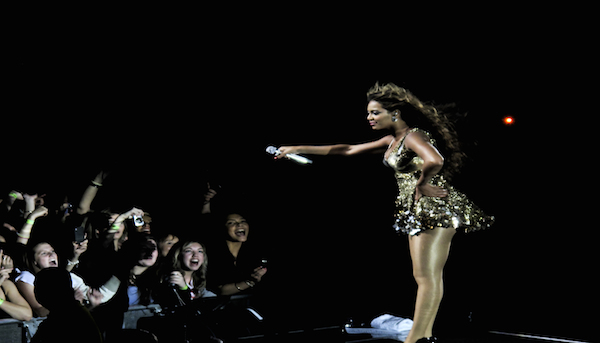 Beyoncé certainly doesn’t need to add anything more to her workload, but that hasn’t stopped her before. And it doesn’t seem to be an impediment in her latest endeavor: a fashion line with Topshop.

The superstar and the clothing retailer will be launching a line of “athleisure” wear, which in case you’re not a young person, is pretty much what everyone under the age of 30 wears these days. It’s sort of marriage between high fashion and yoga pants because, you know, you want to feel comfy for a long day of texting and Snapchatting, right?

But here’s what really makes it an interesting mashup. “When celebrities make clothes, they typically do it one of two ways: launch a small, independent label (see Victoria Beckham or The Row by Ashley and Mary-Kate Olson) or rent their name and aesthetic to a massive retailer via some kind of exclusive licensing agreement (seeRyan Seacrest suits at Macy’s),” reports Bloomberg. “Beyoncé has done neither. Her deal with Topshop is a 50-50 partnership.”

And this means that she could make a lot more money without all the issues of owning her own brand outright, which, let’s face it, Bey could certainly do. “There’s a reason why Harvard Business School has written a case about Beyoncé,” Bloomberg notes.

So, will the line be green?

Topshop recently launched its third Reclaim to Wear upcycled collection to rave reviews, but most of what the brand does isn’t upcycled. However, Arcadia Group, the brand’s parent company has a strong environmental commitment that it seems to be adding to regularly. But it has also been slow to move on labor issues, which has rubbed some people the wrong way, and for good reason.

But maybe Beyoncé’s recent vegan diet experiment will inform her fashion sense (let’s hope she at least gives up the fur) and take fashion into a truly meaningful new direction.