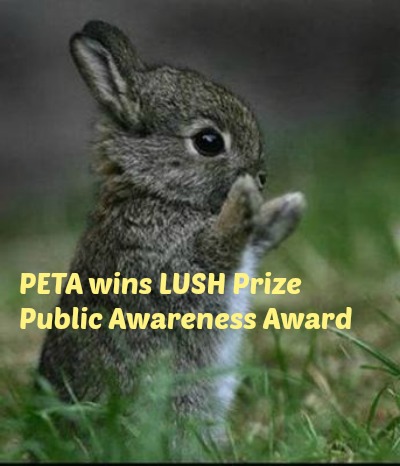 With the huge increase in public opposition to animal testing over the past decade, laboratories are trying to keep a lid on their cruel and deadly deeds now more than ever. But as callous companies and universities look to become more covert, PETA has made sure that these abusers can’t hide in the shadows. And this year, LUSH Cosmetics awarded our efforts with its prestigious LUSH Prize Public Awareness Award for exposing and ending experiments on animals.

The $40,000 prize will fund more investigations, exposés, corporate negotiations, scientific research, public protest campaigns, and attention-grabbing advertisements. Those tactics have helped PETA save animals again and again this year. We convinced the U.S. Army to scale back its use of animals in deadly training drills, got five of the last seven major airlines still shipping monkeys to laboratories to end the practice, and encouraged people to send more than 5 million protest e-mails about animal-experimentation issues via PETA’s website.

We’ve seen significant progress abroad as well. In China, approximately 300,000 rabbits, mice, rats, and other animals are poisoned and killed every year in cruel and unreliable tests for cosmetics and personal-care products, which are required by the Chinese government.

In early 2012, PETA first broke the story that some companies claiming to be cruelty-free were secretly paying for tests on animals in China and immediately initiated a unique effort to end these cruel cosmetics-testing requirements. Thanks in part to grants from PETA, scientists from the Institute for In Vitro Sciences have set up training laboratories at four universities in China and have been training Chinese scientists in non-animal testing methods. China is set to approve its first non-animal cosmetics test and has a five-year plan for the acceptance of all non-animal tests used in the EU.

We’ve also worked with many companies—including Paul Mitchell, Nature’s Gate, Dermalogica, Pangea Organics, and Juice Beauty—that have ultimately chosen principles over profits and stopped selling their products in China so that they could stay true to their cruelty-free principles. And many more companies, including Urban Decay and NYX, have pledged not to enter the Chinese market until cruel tests on animals for cosmetics are no longer required there.

To make it easy for shoppers to choose cosmetics that weren’t tested on animals anywhere in the world, PETA took its cruelty-free campaign global and expanded our Beauty Without Bunnies website to include an international database of companies that do and do not test on animals. PETA is also offering consumers a compact cruelty-free guide for easy shopping. Click here to get your free copy, and be a bunny’s honey every time you shop.

People for the Ethical Treatment of Animals (PETA), with more than 3 million members and supporters, is the largest animal rights organization in the world. PETA focuses its attention on the four areas in which the largest numbers of animals suffer the most intensely for the longest periods of time: on factory farms, in laboratories, in the clothing trade, and in the entertainment industry.