The show follows them as they sit side-by-side with other young workers, sewing garments for 8+ hours a day, six days a week.

By the end of day one, the bloggers are, for the most part, horrified at the conditions the sweatshop workers have endured for so long. 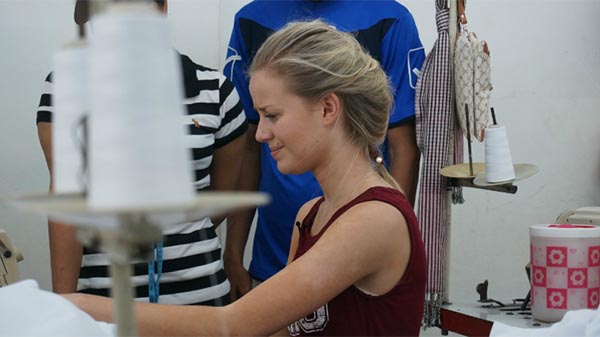 But far from the entertainment value (if you can really call it that), the sweatshop reality show draws attention to an important issue at the center of sustainability in clothing manufacturing: that people don’t really think about where their clothes come from.

The bloggers innocently admit that they didn’t realize the extent to which sweatshop workers were exploited in the making of, say, an $11 T-shirt. It’s also safe to say that most people don’t consider the “human element” when it comes to shopping.

Just last year, British shoppers at retailer Primark found notes from alleged prisoners begging for help that were sewn into garments. In one case, two women found hand-written notes sewn into some bargain-bin tops in Wales. The notes began with an “SOS” and then went into detail about the grueling conditions of the workers’ 15-hour workdays.

But recently, it seems like sustainable practices have become somewhat brag-worthy for most brands, becoming another selling point for millennial consumers, who seem to care a bit more about eco-conscious and fair trade practices.

It’s clear in the first episode of the show- the garment workers aren’t asking for much- just increased wages and more comfortable working conditions (like fans and food). And some brands, including H&M, claim to be making a more concerted effort to give garment workers more reasonable compensation. The brand has plans to raise wages for garment workers by 2018.

You can tune in to Deadly Fashion online (it has Spanish and English subtitles).