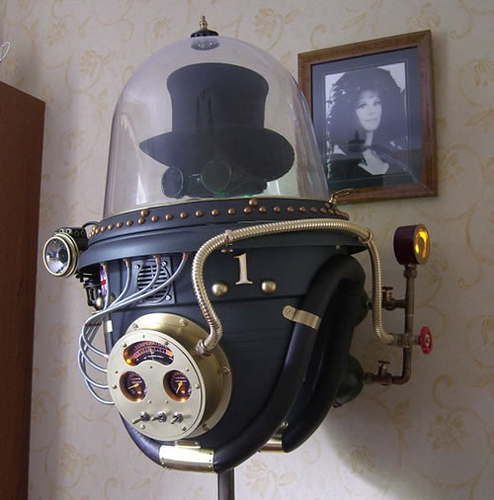 If you’ve seen anyone walking around recently with parasols, goggles or ray guns, cancel that call to Homeland Security. Metropolitan cities are being invaded, but not by anyone hostile. The trend is called steampunk, and it’s something of a treat, especially if you’re into transforming metal, wood and brass into fantastic, handcrafted creations. Here’s a few tips on how to recognize (and understand!) this interesting sub-culture.

The term Steampunk refers to the Victorian age that this trend is primarily influenced by, an age where steam power was used almost exclusively. Steampunk draws from a Neo-Victorian aesthetic, in which human potential, incredible inventions and fantasy abounds. The French author, Jules-Verne is a fundamental source of inspiration, and his Journey to the Center of the Earth and Twenty Thousand Leagues Under the Sea exemplify the aesthetic and cultural landscape of the Steampunk mindset. [social_buttons]

2.  Steampunk: Should I be afraid?

One of the tenets of Steampunk is unbridled optimism, so although it’s natural to feel frightened when you happen upon a fellow wielding a souped-up ray gun, stay calm: he is a real gentleman! Like so many lifestyle trends, Steampunk is anti-establishment, but don’t look for a can of spray paint in their hands. Steampunkers are intensely creative, talented people. Just take a look at the things they come up with!

3.  Steampunk: The oddest green trend ever?

Steampunk goes to great lengths to transform basic, utilitarian objects into magnificent, fantastical art pieces that actually work. Laptops, helmets, USB keys, watches, portable phones and headsets become part of the Steampunk aesthetic when “modded” with period-appropriate materials like iron, brass and wood. Throw in some accessories (parasols, petticoats, stockings and bustles for the ladies, spats, watch fobs, and vests for the men) and you’re good to go.

So the next time you head out to the recycling bin, take a minute to think about the potentially delightful things you’re getting rid of. Why not organize a series of Steampunk Saturdays and invite your friends and neighbors to mod up their telephones? Am I too Utopian, or is Steampunk this decade’s friendliest green trend?

Courtney is a freelance copywriter based out of the beautiful Berkshires and the equally beautiful Paris. A curious arrangement, to be sure, but one that allows Courtney to achieve an inspiring balance between her outer cosmopolite and her inner greenie.

Courtney has been working as a freelance writer for quite a while, specializing most recently in brand identity development for eco-luxury clients like Jurlique, Sephora, and SpaRitual. With her filmmaker husband, she also writes screenplays and translates films and documentaries in and out of French. Her short stories and poetry have appeared online and in literary magazines like the Susquehanna Review, In Other Words, and Defenestration. She is currently working on a series of humorous essays about gainful employment.

An active member of the online community, Courtney writes a weekly food column for the cultural networking site, KadmusArts.com, maintains a lifestyle blog with Parisian shopping and dining tips, and posts current fiction projects on Writings on a Log. You can view examples of her copywriting at http://brightwords.blogspot.com/