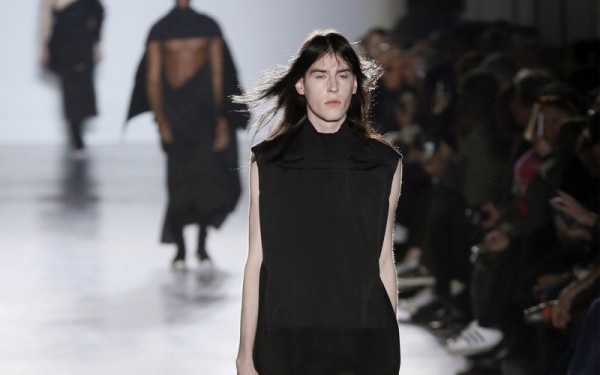 I love a good look at a penis as much as the next gal, but what the heck were they doing peering out from underneath Rick Owens’ latest fall/winter collection catwalk in Paris?

According to the Guardian, Owens had four of his male models in his show sport peepholes of sorts in his tunic-like collection, with some NSFW skin showing just ever-so-slightly. “The flash of flesh was presented subtly, in an otherwise typically dramatic, drapey collection of dark colours and loose silhouettes,” the Guardian explained. “As the audience gradually realised that a taboo was being broken in front of their eyes, whispers and occasional giggles rippled down the front row like a Mexican wave. It was a move which earned him the Instagram hashtag: #dickowens.”

Of course, the internet is all abuzz about the penises, the outrage though, is somewhat misdirected.

If it had been pretty much any part of a naked woman revealed on a catwalk, it would hardly be worthy of a mention. It’s practically expected that we see near-naked women positioned around couture fashion. The Guardian called Owens’ sneaky penis peak “a highly unusual move,” which, of course, it totally is. Even though it shouldn’t be.

If fashion designers like Rick Owens want to shock us, that’s fine, I suppose. It does garner attention for a brand. But I love what the Daily Beast had to say about it, which is to say, the penis deserves the attention for its unimpressive stature, “Here it is, not thrusting and bulge-y in a pair of tighty-whities or Speedo, but just hanging there, slack and strange, lost,” says the Daily Beast. “Look at these walnuts, women of the world: This ridiculous thing is the basis of patriarchy. This little scrunchy sack and mini-gherkin is the root of wars and female subjugation.”

If fashion can do women any favors, perhaps it’s not in retooling its messages about body image and beauty, but in reminding us that we need not be oppressed or overpowered by the unmighty penis any longer.