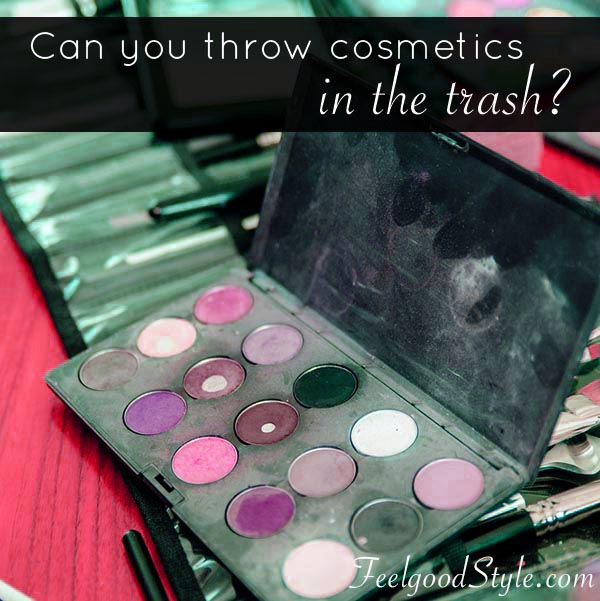 We write a lot about ditching your toxic cosmetics in favor of safer alternatives, but how should you dispose of them? Can you just toss them into the trash?

According to a recent piece that Lisa Forher shared over at The Good Human, throwing your old, toxic cosmetics into the bin isn’t the best way to dispose of them. Forher explains that cosmetics that contain chemicals like parabens, BPA, 1,4 Dioxane pollute the land and water surrounding landfills just like any other toxic waste.

The U.S. Geological Survey calls the mix of chemicals that accumulates under landfills leachate. Leachate is made up of more than 130 hazardous chemicals, some of which are found in toxic cosmetics. In fact, leachate is such a problem that Environmental Working Group spokesperson Samantha Geller says that if “the ingredients aren’t egregious,” it’s better to use up toxic cosmetics than to throw them in the trash. Wow.

So, what should you do if the ingredients are egregious? Forher offers two disposal methods:

1. Find a hazardous waste facility. Earth 911 is my go-to for finding local resources like this. They have a huge database of recycling and waste disposal facilities. This is the best way to get rid of toxic cosmetics.

2. Throw them out. If you don’t have access to hazardous waste disposal, she says to consolidate all of your toxic cosmetics into one large plastic container, close that container, and throw it away. So, if you’re tossing eye shadow, lipstick, and lotion, put everything into the lotion bottle. Clean out the other containers and either reuse them, recycle them, or throw them in the trash.