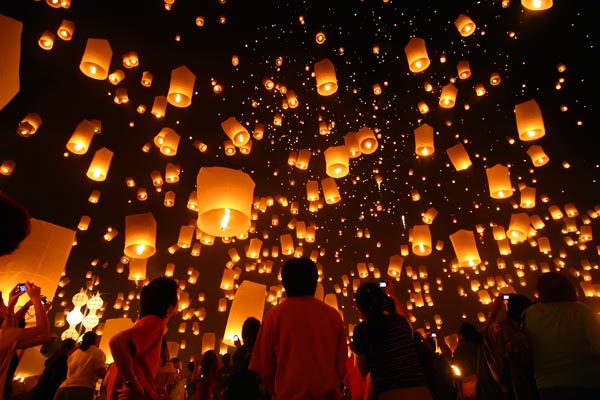 Risk taking. Oh man it can be scary. How do you know if your risk will pay off? Will you enjoy the risk, will it be scary, or both? What will happen if you do make the leap? These are some of the questions that hold most of us back.

Before I turned 30 I hardly took any risks. I stayed in the same soul-sucking job because the money was good, I was comfortable, and I could buy all the things I wanted. I kept the same boring boyfriend because it was easy and the dating world scared me. And I stayed in the same city I grew up in because I knew people and was too lazy to make new friends. Sound familiar?

I don’t know what exactly it was about turning 30 that made me shake up my life but the minute I was no longer in my 20s, my mindset shifted. I no longer wanted to ‘settle.’ I wanted to live the life so many of us dream about. I wanted to get rid of my meaningless possessions, have adventures, quit my job, sell my apartment, challenge myself, and fall in love with someone who gave me butterflies.

So I did it. I sold all the ‘things’ I thought were making me happy, ended my relationship, said goodbye to my friends, and left on what I was sure would be the greatest adventure of my life.

And for the first month, I was miserable.

And then I arrived in Asia.

Now if you have never traveled before, traveling Asia is a shock to your system, to say the least.

Hardly anyone speaks English, the customs are drastically different, the way of life is incredibly relaxed and unlike anything I had ever seen, and on top of that the bathrooms are mostly holes in the ground that you squat over. Yeah. Picture that.

To say I wanted to go home is a grave understatement, but I decided to commit myself to my goals and live the life I so desperately wanted to live.

I rented a tiny beach house on one of the Thai islands that was nothing more than a room with a bathroom, a kitchen, and a bed on the floor. I went for daily walks on the beach, did yoga, ate fresh seafood nearly every day, indulged in $10 massages, met fellow travelers, and ultimately met ‘him.’

He was Australian, a few years younger than me, and one of the kindest people I had ever met.

We fell in love and our adventure together began. We traveled from Thailand to Malaysia, China to Bali, Australia to New Zealand, Portugal to Canada, and ended up on a deserted beach in Costa Rica.

With one of the most intense rainstorms we had ever seen heading straight for us, the Aussie and I tried to find a slice of shelter under a tree canopy. As I was setting up our little picnic area I noticed he was no longer beside me. As I turned around to look for him I found him on one knee.

He said his speech, I said yes, and we kissed to seal the deal.

The story doesn’t even sound real to me but I wake up every morning with a feeling of gratitude and the reminder that it is real.

When we take ourselves out of our comfort zones and shed the unnecessary possessions, we open ourselves up to any possibility or opportunity we could ever want, and some we have probably never even thought of.

The one thing I have learned from my experience is it’s never too late. So ditch the rut and shake things up. After all, life begins at the end of your comfort zone.

Vanessa is a skincare blogging babe whose work can found on various websites around cyberland including reviews on Neutrogena Skin ID, as well as other popular skincare brands. The best part about her job? She has awesome skin!