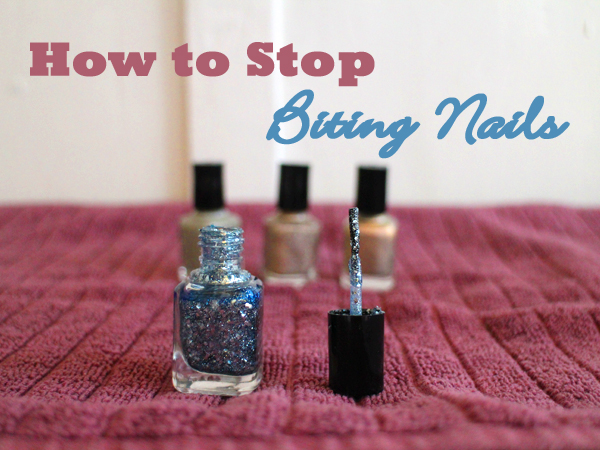 I started biting my nails when I was 5-years-old.  I didn’t like the feeling of getting my nails clipped, and I figured nail biting would solve my problems.  If I had my nails bitten down to nothing, there wouldn’t be anything to trim.

It worked, but over the years I was met with a new problem.  I couldn’t stop.  Whenever I was anxious, bored, deep in thought, or caught up in a TV show, my hand went to my mouth, and once again my nails were gone.

Every New Year my resolution was the same.  This would be the year I’d stop biting my nails.  Like so many New Year’s resolutions, it was usually rescinded by January 7th.

I tried bitter nail solutions that make your nails taste bad if you bite them… and soon realized that after a nibble or two the taste was gone.  I had people tell me to wear a rubber band on my wrist and snap myself whenever I bit a nail, but I’m not the self-punishing sort.  I just couldn’t go there.  I wore acrylic nails for a while thinking that I’d get out of the habit, but they made my nails underneath weak and wavy.  After the acrylics came off, they were thinner and unhealthier than before, which made it even harder to grow them.

One time as an adult, though, I got close to quitting for good.  I was able to not bite for quite a while, and then I decided to celebrate by getting a manicure.  The manicurist trimmed and filed my nails down to nothing, and I was back to square one.  Feeling defeated, I decided to give up on the whole thing.

By the time I was getting married, I told the wedding photographer not to bother with the usual shots of rings on hands and whatnot.  With wedding planning in high gear, there was no way that I was going to add “drop lifelong habit” to my list of to-do’s.

Then a month ago, I was at a gathering along with a woman who had a beautiful French manicure.  (I’ve always loved the look of those.)  I complimented her on it and she asked why I didn’t get one too.

On the car ride home, it occurred to me what a silly reason that was to not have something I wanted.  There are so many things that we deny ourselves because of costs, time, or because we feel we lack the power to make the change we want.  But long, pretty nails?  Those are entirely in my control.

So I set out to quit the nail biting habit.  It has been one month, and here’s what I’ve learned along the way.

How To Stop Biting Nails

1.  Like any other change, you have to really want it.

Whenever I felt the urge to bite my nails, I’d pamper them instead.  I’d lather on moisturizer, clean them, tidy them, or paint them.

3.  If you feel tempted to take a nibble, try aversion tactics.

Do an image search and look at pictures on the internet of bitten up nails.  When they’re your own hands, you get used to them, but when you see the nails on other people, you realize how unattractive it looks.  Or do an image search for long, healthy nails, and imagine how good you’ll feel when your hands look that way too.

A little nibble to shape things up doesn’t go anywhere good.  Get a nice file and nail trimmer, and keep your nails looking neat and orderly.

It can be disappointing when a crack, snag, or overeager nail technician takes down your longest nail.  Don’t use that as a reason to give up altogether.  Quitting today won’t get you closer to your goal of long nails.

6.  Use bright polish as a way of distracting yourself from your progress.

I bought nail polishes that were on the bright side, so that they’d mask the white growing underneath.  Out of sight, out of mind.  By the time I removed the polish, I’d made a lot of headway, which encouraged me to keep going.

7. Enjoy the simple perks that come with your fledgling nails.

Simply scratching an itch feels so much more satisfying with longer nails.  I can tell that my cats are enjoying this upgrade, and I am too!  Pay attention to those little pleasures that your new nails give you – whether it’s the ability to easily remove ice from the tray or remove a sticker from an apple.

8.  Treat yourself for your progress.

A new ring, nail polish, or hand lotion is a terrific way of saying, “Good job, me!”

Have you ever quit a bad habit?  What worked for you?