Clark’s Honey Farm is committed to help SAVE THE PLANET.

With all the news’s going around about the disappearing of the bees, (about 70% on the East Coast) I became very intrigued to learn more about this honey farm’s passion to help save the planet.

At the current time they have over 2,000 healthy bee colonies. Their goal is to double the colonies in the next few years. Each colony has over 60,000 + bees.

They claim to provide enriching environments for their bees to thrive. “The bees are instrumental in the survival of the planet”.

They also ship their bees across the country to help farmers in need of pollination.

Bees pollinate up to one third of our food plants, and in recent months, bee colonies have been mysteriously collapsing. Up to 70% of bees on the East coast have disappeared, and about 50% in other parts of the country. One recent news account from New Hampshire says this: “The problem, called colony collapse disorder, already has hit beekeepers in 24 states, part of Canada, and several European countries. Many bees seem to disappear, with few to no bodies of dead bees found near the hives. The remaining bees, meanwhile, show mysterious symptoms. ”

I think it’s a wonderful thing this company is doing and I support them 100%.  In addition to the work they do to help save the bees, the candles and honey products are great!  I personally like the candles because they naturally clear the air of harmful toxins.

Each artisan crafted, hand poured candle is poured with intention and in support of this ideology. Clark’s candles are clean burning, paraffin free, and ignite the process of negative ionization – clearing your air of free radicals.

During the Middles Ages beeswax was introduced as the “new” substance to manufacture candles. Prior to that, animal tallow was used, but it was smelly, dirty and toxic. Beeswax candles were a marked improvement over those made with tallow because they burned pure and clean. However, they were expensive and only the wealthy could afford them. They were also preferred for religious significance.

Beeswax is the only fuel known to both ancient and modern science to produce a negative ion when burning. Negative ions are very conducive to human balance at all cellular levels. Burning Clark’s Wax Works candles removes dust, household odors, pollen, viruses, toxins – as well as mold and mildew – from the air. 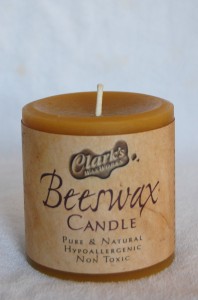 You can find Clarks Beeswax candles at Whole Foods, Chamberlains, The Vitamin Cottage and Wild Oats or by emailing Deborah at dkit63@yahoo.com