This is part 2 in a three part series on how a good shave doesn’t have to come at the cost of the environment. Part 1 covered alternatives to the can-o-foam shaving cream. Part 3 will cover various aftershave choices.

The goal of this article is to help you throw away less stuff. If you can get a better shave and enjoy the shaving experience more while you’re at it, so much the better. While there are energy efficient electric shavers on the market, we’ll only be looking at wet shaving methods since the first and third parts of this series also cover wet shaving techniques. 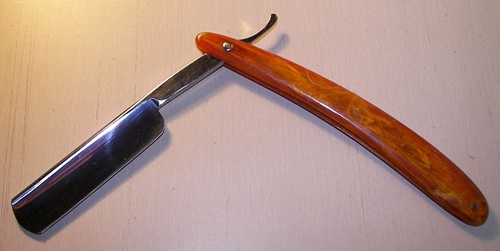 To get a more manly shave, you’d practically have to be crouching over a river shaving with an Australian hunting knife with a nine-inch blade and saying something like “Now this is a knife.” In addition, straight razors are also a zero waste way to shave. Shaving with a straight razor is a skill you have to learn, although it’s not that difficult. The shaving experience is also entirely different from using disposable or safety razors, and one that I generally prefer. This experience involves a brush, strop, a cake of shaving soap, hot water and sometimes a warm towel. The shave can take a few minutes longer, but it’s well worth it. Although these razors have a particularly scary look and nickname, cutthroats, I find that they give me fewer nicks, marks and burns than disposable or safety razors. That’s because there’s only one blade and you have more control over that blade’s angle than you do with other razors.

A new straight razor can cost well over $100, but after a certain point you’re only paying for gold finishing on the blade or a fancy handle. You can find cheaper straight razors online, but make sure the blade isn’t tarnished or damaged. There are lots of places to buy straight razors on the net. I personally bought my straight razor new from Dovo Razors UK and would recommend the owner, Steve, as a knowledgeable, good guy to buy from. James Whittall at MenEssentials and John Meek at Mother Earth News both have good articles on straight razors and how to use them.

The predecessor of the disposable razor, traditional safety razors allow you to keep the razor and the razor head. They just require you to buy and throw away the razor blade itself. Classic safety razors have been around for a little over a hundred years and come in a variety of different styles. The razor itself ranges in cost from $25 to over $100, although you can find cheaply made ones for less and can sometimes find a deal on an antique razor. The blades typically only cost about $0.50 each. 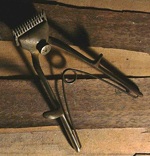 The variety of manual clippers is dizzying and slightly intimidating. They range from hand-pump to wind-up to roll-on razors. Most are museum pieces and some, like the one pictured here, look like they were failed attempts at torture devices. Only a few have hit the market in the not too distant past, such as this wind-up shaver shown at Treehugger. Manual beard clippers differ from the other shaving techniques in this list because they more closely resemble electric shavers. Also, sharpening the blades may be difficult. Nonetheless, they appear to be zero waste shavers that deserve at least a passing nod. Anyone who has used one would be welcome to comment below on the experience.

Appologies in advance for linking to an “as seen on TV” website, especially one with such an irritating infomercialesque video, but as we’re talking about ways to reduce waste in shaving we should mention that there are at least two products that will resharpen your disposable razor heads, giving them a longer life. One is called Save a Blade, costs $19.95 and has an irritating, “as seen on TV” website. The other is called the Razor Saver, costs $11.95 and is available from Sustainable Village.

There is one company making razors with disposable heads more environmentally friendly. Preserve makes double and tripple blade razors with disposable heads and a handle made from 100% recycled plastic. The plastic comes in part from Stonyfield Farm yogurt cups. I’ve compared them to any number of Gillette models and the difference is only that Preserve razors are about half the price, which could be because the company spends significantly less money on their marketing department trying to decide how many blades to add next. The shaving experience and effect are otherwise pretty similar. Keep in mind that in most places you can only recycle plastic once, which means that after using them these razors too get dumped.

#6: Other razors with disposable heads

A step up from the fully disposable razor and a step well below Preserve’s razor is the average razor with detachable, disposable heads. On the plus side, these also have machine finished blades, which are very sharp, and allow you to throw away just the razor head and keep the handle. I’ve used a number of these razors before and would say that no matter how many extra blades the marketing director decides to throw on, they all just about feel and act the same.

The truth of the matter is that those extra blades don’t do a whole lot. In fact, multiple blades just tend to cause the razor head to clog with hair, which means you have to buy new blades more frequently. Good for the company; bad for you. Getting a good shave involves what are called the first and second passes. The first pass goes with the grain of the hair. After completing the first pass, reapply the shaving cream and do a second pass, this time against the grain of the hair. One blade will work just fine and you’ll get a smoother shave than if you use five blades and only do the first pass.

On the down side, these razors are maddeningly expensive and the same company will make razor heads that don’t fit on its previous models of razors, forcing you to again toss the entire razor and buy the latest model.