Why is it so hard to lose weight? There’s one factor at play that you probably hadn’t considered.

We know that some folks have a harder time losing weight than others, and there are lots of factors at play when it comes to maintaining a healthy weight. In the surprising TED Talk above, social psychologist Emily Balcetis talks about one reason why it is so hard for some people to lose weight.

“Perception is subjective. What we think we see is actually filtered through our own mind’s eye.”

So, how does that relate to exercise? Our perception can alter how we see things. People who are dieting see apples as larger than folks who aren’t dieting, for example. And our mind’s eye just may make exercise seem more difficult to some people than to others, according to research by Balcetis and her team.

Our eyes don’t actually see most of the world in focus, so “our minds have to clarify and make sense of what we see,” says Balcetis. 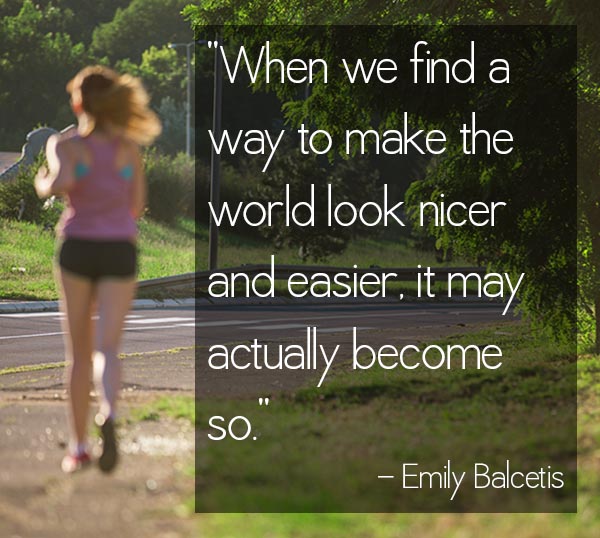 In her study, Balcetis found that people who were less physically fit estimated distance differently from people in better shape. So, if running a mile feels insurmountable to you, the way your brain is interpreting what you see may be working against you.

Why is it so hard to lose weight? Your eyes may be telling you that climbing a flight of stairs or walking to the store instead of driving is actually going to be harder than it actually is, because your brain is telling you that it’s a longer trip.

Balcetis’s team also found that committing to a manageable goal also makes us perceive exercise as easier. So, why is it so hard to lose weight? According to Balcetis, we need to keep our attention on the finish line. Literally. When you’re out for a walk, run, or bike ride, don’t look around you. Keep your vision focused on where you’re going. She found that this strategy makes us perceive distances as up to 30 percent shorter. They also reported 17 percent less exertion and moved 23 percent faster.