Can Fashion Change the World?

As a refreshing change of pace, Vogue hosted a panel discussion on ethical and sustainable fashion with the ambitious title, “Can fashion change the world?”. It featured Livia Firth, Katherine Hamnett, Tom Craig and Dame Vivienne Westwood, moderated by Vogue features director Jo Ellison. The talk was well attended, a sign that fashionistas are increasingly aware that the industry has many impacts that are worthy of our attention and action. After the tragic deaths of more than 400 garments workers just outside of Dhaka, Bangladesh two days prior, the panelists spoke with urgency and made compelling arguments that the world cannot afford, and should not tolerate, the terrible price we pay for fashion.

“It is not only that fashion can change the world, but it absolutely must, considering what happened in Bangladesh two days ago. It is one disaster too many for us to ignore and this is why I started the Green Carpet Challenge.” Livia Firth, Vogue Festival 2013.

Asking anyone to answer such a broad and complex question as, ‘can fashion change the world” in a mere 45 minutes is pretty unrealistic. The issues facing the industry are complex and the answers are diverse. Livia Firth spoke of her work with Eco-Age and how her consultancy has collaborated with Chanel, Gucci, Versace and others. Being married to Colin Firth, and invited to walk the red carpets, Livia felt compelled to make the most of her personal opportunities to communicate and promote change through her wardrobe. She has convinced designers to confront their supply chains, work with innovative and lower impact textiles and create sustainable fashion that is fairer to both people and planet. As she explains, she is “working on the public face of sustainable style”, aspirational and glamorous.

The crowd grew very quiet as fashion designer, Katherine Hamnett introduced herself by saying that she had considered foregoing her five minutes speaking slot for five minutes of silence instead. She hoped to pay respects to the lives that were lost not only in the building collapse in Dhaka, but in all of the garment industry tragedies. She went on to highlight the fact that progress in the fashion industry, such as the uptake of organic cotton, is not increasing quickly enough. She stated “the pace of change is too slow, sorry folks,” and she estimated that at the current rate of change we’d be facing “…another 1250 years of chemical pesticides. I don’t think so.” Fashion photographer Tom Craig went on to share his iconic images with the audience. He identified the roles that art and fashion have in documenting and understanding humanitarian and global issues. He has taken on the responsibility to share the true face of fashion, to create change through the power of imagery and media. 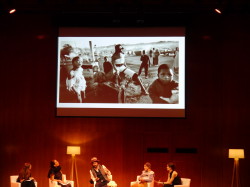 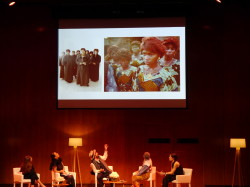 Unlike Livia Firth, Dame Vivienne Westwood didn’t have speaking notes, and unlike all the other panelists, she didn’t adhere to the timeline set out by Ellison, saying it’s not her fault Vogue didn’t organise it properly. Her contribution was highly politicized and moved between diverse topics including the post-war period of rebuilding, the inequity of the global financial system, anti-Americanism, climate change and activism, to name a few. Ellison tried her utmost to help Westwood wrap up at the five-minute mark, and she flat-out refused to stop speaking for a further five minutes. The audience loved it and laughed loudly at Westwood’s verbal non-compliance, even though it meant the seminar went over time without any opportunity for Q&A. Westwood’s primary recommendation was to take action, follow her blog and join her initiative at the Climate Revolution.

The panelists were passionate and they have all pioneered approaches to change the exploitative elements of the fashion industry, in their own ways. The truth is fashion is already changing the world, sometimes for the worst and the true challenge facing the industry is to accept that change is inevitable if fashion will ever become ethical and sustainable.