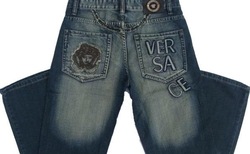 Italian design house Versace, who recently came under fire for sandblasting jeans, has committed to banning the dangerous practice following pressure from activists.

During the sandblasting process sand is fired at jeans under high pressure, giving the fabric a distinct “worn” look.  The problem is that this process can cause a potentially lethal pulmonary disease called silicosis from the inhaled particles.  Evidently, workers have also been killed during the process in both Turkey and Bangladesh.

The decision to ban comes after a two month international campaign by the Clean Clothes Campaign on Change.org.  More than 1,200 people world-wide joined this campaign.

After careful review Versace has announced that their suppliers will be banned from using sandblasting effective immediately.

“Versace has specifically asked every supplier (and will ask any new supplier as a condition to work with Versace) to certify that they are not using sandblasting.”  Versace’s Tomaso Galli

Galli went on to say that any supplier found to be employing sandblasting as a production technique “will be considered in breach of contract and dismissed accordingly.”

This consumer call to action and subsequent follow-up by the fashion house is a huge step forward in healthier clothing manufacturing practices.  Said Change.org organizer Meredith Slater, “Versace customers called on the company to ban a practice that endangered workers, and the company responded by saying that it would not only ban the practice, but stand up for the elimination of sandblasting throughout the industry.”

Versace joins Gucci, H&M and C&A in the sandblasting ban and is encouraging other jeans producers to follow suit.  The Clean Clothes Campaign now has its sights on high-end brands Dolce & Gabbana and Armani, both of which still refuse to discuss their brands’ sandblasting practices.