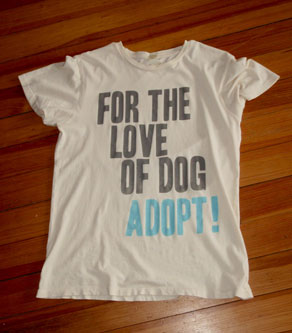 I can’t get enough of Vaute Couture, (if you haven’t read my recent post about Vaute Couture’s Bomono vegan winter coat you must read it!) so I thought I would share another goodie from the mind of Leanne Mai-ly Hilgart.

“For the Love of Dog, Adopt!” tee is clever yet blunt. Vaute Couture has once again enlightened me. I was unaware of how many animals are being put to sleep each year- a staggering amount- three to four million healthy cats and dogs. 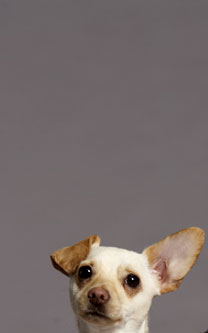 ME- How long have you been making “For the Love of Dog, Adopt!” tee?

Leanne- We just officially launched the RTW tee line this summer- so it has been around for, um, 2 months? I didn’t originally plan to do tees too, but I got a few requests for the “V is for Vegan” tee that I had made for myself, and I realized- hey- I guess some chic positive animal loving tees could be fun to design too!

ME- Have you adopted pets, if so how many?

LEANNE- Yes! In college I started a group called “DePaul Voice for the Animals” which volunteered 3 x a week at Chicago Animal Care- aka the city pound (as well as doing adoption events, meat-outs in the quad, Ringling Bros protests, and bringing speakers like Howard Lyman on campus.) For a few years after school I was living in the suburbs and commuting 4 hours a day- this would’ve left a little fur-ball at home for quite a while alone, so we held off adopting. So, when I decided to start Vaute Couture last summer, I realized it also meant I’d be able to adopt a new friend too! This was way too exciting to go into Chicago Animal Care and find our little boy! His name is Whitman- like the author- and he’s in the Look Book.  He’s half chihuahua and half mischief, okay dachsund (we think), and he’s seriously the love of my life (but don’t tell my husband!)

-Whitman is pictured above, ain’t he a looker?-

Six to eight million dogs and cats live in shelters each year, while half of them, for no reason except lack of space, are put to sleep! By supporting breeders and pet stores we continue to add to the over populated cat and dog community. So please, For the Love of Dog, Adopt! Find a shelter or rescue center near you at www.PetFinder.org, and don’t forget to spay and neuter.

The incredible activist statement tee (available for men and women,) made from 100% organic cotton and low impact dyes is only $26! That’s dang affordable. Thanks, Leanne, for making it possible for us all to wear our hearts on our tee.