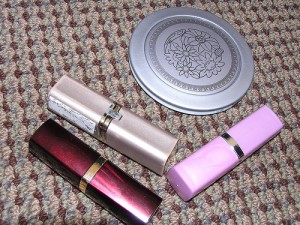 What did they find? Well, the FDA scientists found lead in every brand of lipstick that they tested, but they don’t consider the toxic metal a safety concern.

OMG! Seriously. Back in 2007 the Campaign for Safe Cosmetics first blew the whistle on lead filled lipsticks finding that 61% of the 33 brands they tested contained some levels of lead. Shortly after the results were released to the public the US FDA said they’d look into it. Gee, it only took 3 years.

To add insult to injury instead of releasing the recent findings to the public the FDA published the findings in an obscure journal that the public doesn’t really have access to: the July/August issue of the Journal of Cosmetic Science.

Yeah that’s on the top of my reading list.

Anyway the really startling thing (well, one of them because this just keeps getting better) is that the FDA found lead in every single sample of lipstick they tested, some up to five times higher than the Campaign for Safe Cosmetics found in 2007.

The FDA tested 22 brands of lipsticks of which the brand names and manufacturers have not been disclosed.

Stay with me folks, the news is going to get even worse.

The FDA has declared that the small trace amounts of lead found are harmless. HARMLESS! Since when is lead harmless?

We can’t use lead paint in the US, children’s toys containing lead are banned, but hey lead found in something applied directly to the skin is OK. Yeah makes sense to me! I DON’T THINK SO!

Lead is a contaminate that builds up in the body over time. It doesn’t go in then flush out.

This is from the Rodale article:

The cumulative affect of using lead-contaminated lipstick every day for decades, as many women do, could lead to serious health problems. “These small amounts applied day after day add up,” says Malkan. “Those exposures stay in our bodies. We really need to be avoiding all lead exposure.” Her sentiments are echoed by a number of health professionals who insist that there is no such thing as “safe” lead levels. Recent research has also found that lead builds up in bones and then gets released as your bones break down when you age, and that could lead to high blood pressure and even dementia. Plus, it’s likely that lead in lipstick is added to exposure from other sources; small amounts of lead can be detected in the air, our water, our food, and dozens of other products people handle on a daily basis. “The primary problem with lipstick is that it’s used frequently by the most vulnerable: pregnant women,” Malkan adds, noting that the even the tiniest amounts of lead they could ingest could cause damage to a developing fetus. A new study published in the journal NeuroToxicology finds that even small amounts of lead can alter the amount of white matter (which can influence rates of disease) in a developing baby’s brain.

So what’s the deal? Does the FDA just not care about women? Do they think this is just a silly woman’s issue that they shouldn’t concern themselves with?

Maybe they think we should just all chuck our cosmetics and avoid the issue altogether.

I think it is high time we should be able to do so without worrying about toxins in our cosmetics. In such a “modern” country you would think the US government would care more about the women of their country (and when it comes right down to it, everyone who kisses a woman or is exposed to the lipstick in some manner).

In the June 2002 issue of Glamour magazine it was reported that women inadvertently ingest about 4 pounds of lipstick in their lifetime. How much lead could that add up to when so many lipsticks contain it?

I wonder what percentage of women wear lipstick?

How much lead exposure does that add up to?

I for one wear lipstick almost everyday. Either lipstick, lip gloss, or just a tinted lip balm- I put some form of stuff on my lips. Thankfully now I use mainly trusted eco-brands, but what about the years before that?

It’s really scary when you start adding up numbers and realizing percentages.

I think the brands tested and levels found need to be disclosed by the FDA and they need to get over their foolish thinking and GET THE LEAD OUT of our lipsticks. Something should really be done about this.

Wenona is married with three crazy kids that range in age from 4 to 18. She is a freelance writer, poet and the author of The Everything Green Wedding Book.

She enjoys reading, writing, crafting and gardening. She tries to do all of these as "greenly" as possible.