The blending of old and new in jewelry is a something one can do on a budget. Find pieces of your old treasures and bring them to life again. The center of this piece is an earring who lost her mate. I originally made this earring when one of my sons was about 5 years old. He was a most enlightened teacher, as he delved deep into his soulful emotional realm ruled by his watery cancer moon; he lead me into glimpses of a most resounding, multidimensional experience and as young Mama. Glimpses into his realm became creative desires as I was sublimely enveloped inside with him. For this brief time of childhood, we are   graced by perceptions of our children directly. Recording such moments into a deeper blue and moon,  sounds within sounds of this tidal dimension as they came our way, made their way into this earring. So inspired, I wished to capture in color even if it was only an outer form of the cancer moon.

I resurrected the piece, this week with an influence from the most recent Scorpio moon. My attempt to blend all the colors of the blue moon and night into the off loom weaving of an earring made into necklace gave me a change to revisit the wonder of my son’s fiery blue spirit. As years ago, he lit a sparkly fire and ran around the house, suddenly to settle into a state of deeper and higher consciousness, as some children are able to do; they pull on our heart like mystics and lead us to teachings from the bottom of the ocean to the highest peaks above.

Once your eyes and ears tune in, to the most perceptive sights and sounds, with such enlightened children, one yearns to own a place recorded in time. Aha! Perhaps synesthesia, and an earring formed; woven without a light lit as dusk came over our home 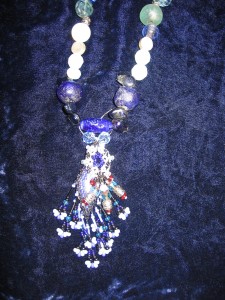 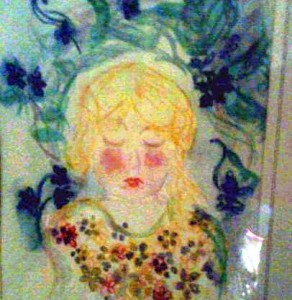 Since that time, two and a half decades ago, I kept this piece and now resurrect that captive evening with the addition of recycled glass, man made opalite, and a touch of silver. Opalite is one of those man made stones that have sublime energetic abilities. They lend the wearer a new ability to bring old states of consciousness out once more! A blissful lesson of love should be revisited, and why not with jewelry?  Even as this memory of my young son is much more, I still enjoy this piece.