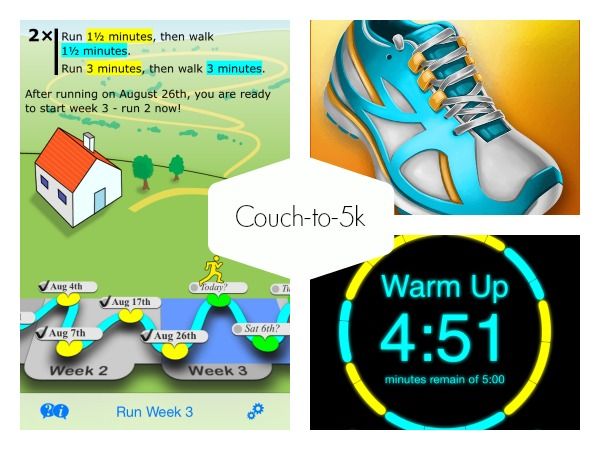 Thinking about trying the Couch to 5K program? The get running app helped me go from feeling like someone who runs to feeling like a runner.

About four years ago something happened that caused some disarray in my otherwise calm and peaceful life, and, as you may have guessed, it was most certainly some baby-having.  The stress of raising a little one was the source of, as is typical, a few tears, a little anxiety, and a whole lotta chaos for my husband and I.

You may also like:  5 Running Recovery Tips + Stretches for Runners.

In an effort to take my nervous, baby-centric energy and re-focus it on something productive and self-helpy, I decided I would run a 10k.  I started training when my son was approximately four months old, and, although I’ve always made activity a hobby, I would never call myself an enthusiast.  I would certainly never tell you that I was heavily into running.

And I’m not what I think of as a runner now, but I do really enjoy it, and I never would have taken the plunge if it weren’t for a Couch to 10K program I used while training for that first race.

After my second son was born nine months ago, and after I decided I was ready to put the old running shoes back on again, I decided to find an app that might better facilitate my headway.  What I settled on was Get Running, an app that incorporates the progression and schedule of available Couch to 5K programs into one neat little package.

For those unfamiliar, a Couch to 5K program truly takes the uninitiated runner from his / her couch to a 5K (about 3.1 mile) run in nine weeks.  It typically begin with workouts that allow for intermingled runs and walks.  It build to a midsection of shorter walks and longer runs.  Eventually the walking portions of the workouts fall away and the runner finds him- or herself running for longer and longer periods until – voila! – it’s a 5K, baby.

The Get Running app is broken down into weeks.  Each week is visualized with a landscape and a winding road.  Each run is marked as a small circle with a corresponding date on the road.  Once you run on the indicated date, the small circle changes in color from green to yellow and boasts a large check mark, which is, frankly, immensely satisfying.  An explanation of each week’s  runs (how much time will be spent walking vs. how much time will be spent running) is documented clearly at the top of the screen, along with a short encouraging sentence.

Once you indicate you’d like to begin running, a warm British woman’s voice (I call her Lucy) leads you through the run, guiding you through a five-minute warm-up, the workout, itself, and a five-minute cool-down.

Lucy is also very encouraging, and my favorite part about her is that she will speak to you over your own playlist, only very briefly decreasing the volume on the song whose bridge she is interrupting to let you know how close you are to completing your run.  One of the hardest parts about a run is watching the time and / or miles crawl by.  Lucy lets you know when you’re halfway through your assigned running or walking period and gives you a ten-second warning leading up to all speed and time changes.

Overall, the app is fantastic for Couch to 5K training.  I give it four enthusiastic stars.  I need and crave structure when I run, as well as a rundown of my milestones and this app delivers without interrupting my music (which can be an issue with structured running apps).  The app will cost you $2.99, which, for me, was money well-spent, especially for the convenience of keeping my running diary safely and accurately stored on my phone (instead of on a dirty piece of paper, sweatily stored in my gym bag).

lives and works in Iowa City, Iowa. She has a film degree from the University of Iowa, and her interests include: watching & writing about film, chasing her kids around, childbirth, healthy cooking & living, and DIY body & baby products. Find me on Google+.