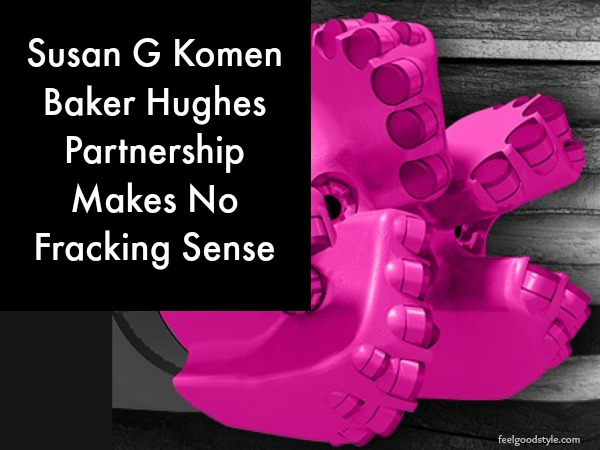 If you, at first sight, considered the Susan G Komen Foundation/Baker Hughes partnership too ridiculous to be true (I know I did), you’d be wrong. The fracking company really has donated a bunch of money to the breast cancer awareness organization. And SGK has accepted them as a partner.

Ok, I get that the main initiative of a fundraising organization is to raise funds. But they should also have standards, right? I mean, if I were the owner of, say, a cosmetics company who made their products with toxic chemical ingredients and I also was affected by breast cancer (and, really, who isn’t?) I would want to donate some of my profits to an organization committed to decimating the disease.

Now let’s say I ran the breast cancer awareness organization. I would be looking to raise as much money as possible for the cause. I may even take the money from the toxic cosmetics company. Sort of in the same vein as carbon offset. But would I slap my name/brand color on their products, in effort giving them lots of credible publicity? No way.

But that is what SGK has done. Not only have they accepted $100, 000 from Baker Hughes, they’ve also signed on to have drill bits produced in their signature pink hue as part of the “Doing Our Bit for the Cure” campaign. The thought behind this rather contrived collaboration is that these drill bits, and the pink (yes, really) boxes they arrive in will spur anyone who sees them (shipping company workers, drivers, oil company workers) to get more interested and involved in the breast cancer cause.

That feels like a pretty big stretch to me. How about you? Especially when you consider the link between benzene, one of the largest petrochemicals used in the oil industry, and cancer. Benzene is a known human carcinogen, including links to breast cancer.

Back to Susan G. Komen. I do not doubt that this organization is about advances in breast cancer. I just feel they should be more selective about the partnerships they create and the message they are sending to their followers and supporters.

How do you feel about the Susan G. Komen/BakerHughes partnership? Should they have teamed up? Should SGK have even taken their donation?