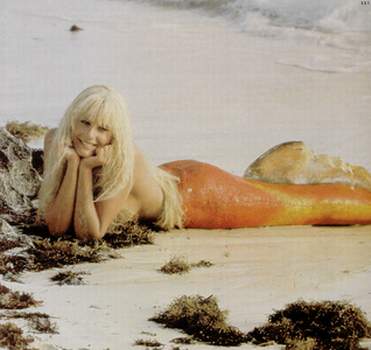 Darryl Hannah, who once played a mermaid, will be joining the hard-line anti-whaling group Sea Shepherd on their annual chase of Japanese whaling ships. Sea Shepherd is the focus of an Animal Planet Series,

Hannah will be joining Sea Shepherd on their flagship, the Steve Irwin, as they left yesterday to chase down Japanese whalers and attempt to use non-violent means to stop the whaling. Sea Shepherd is known for their hard-line stance against whaling and for their pirate-like tactics. They have in the past been labeled “eco-terrorists” and confrontations between whaling ships and the Steve Irwin have sometimes turned violent.

The “Splash” star criticized Greenpeace for failing to join in the chase this year. They are instead shifting towards a focus on changing the attitudes of the Japanese people, where whaling is considered a cultural tradition.

Paul Watson, the Sea Shepherd founder and captain, was an original founder of Greenpeace, but left in 1978 to pursue more aggressive tactics. Watson is also highly critical of Greenpeace.

“I call them ‘the other whaling industry,” he said. “They’ve raised millions of dollars off the whales for this campaign — and now they’re not sending a boat. They should be ashamed.”

Animal Planet premiered “Whale Wars” on November 7th, a seven-part, hour-long, weekly series, that follows the exploits of Sea Shepherd. Darryl Hannah, who is joining the whale chase this year, will not be in the series, which follows the chase from last year.

Japanese crew, which whale primarily in Australian waters, are allowed to kill whales in a loophole allowed for scientific research. The ships often even have signs in English stating that they are doing research, in an attempt to ward of anti-whaling groups. Whale, however, is a delicacy in Japan.

Above screenshot of Darryl Hannah as a mermaid is from the film Splash.

Kelly lives in San Rafael, CA (which is across the Golden Gate Bridge from San Francisco). She competes competitively in triathlon and spends nearly all her time on her bike, in the pool or out running some of the best trails in the country.

After graduating from UC Berkeley, she worked at a start-up fashion magazine for a year and learned more about fashion and photo shoots than she ever wanted to know. She's starting a new job as a reporter for the local MarinScopes newspapers and harbors dreams of becoming the female Edward Murrow. You can read more about her at her website and blog: kellydunleavy.com