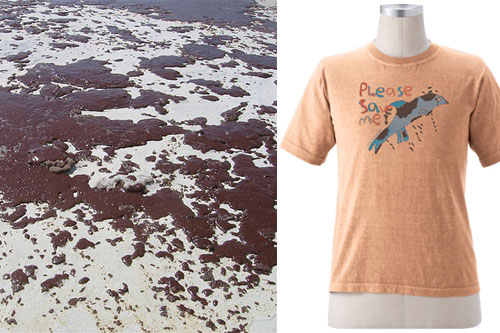 Earth Day 2011 marks the one-year anniversary of the Gulf Coast oil spill, and one t-shirt company is doing its part to support cleanup.

I know, the BP oil spill isn’t making headlines these days, but people living in the Gulf Coast are still suffering its after effects. Earth Creations is looking to raise awareness and relief money through a special edition Earth Day t-shirt. The shirts are part of an Earth Day fundraiser to raise funds for the Alabama Weeks Bay Foundation.

The 100% organic cotton tee is the winning design from their Gulf Coast Green Tees for Our Seas design contest, and they color the cotton using natural, U.S.-harvested clay (a dyeing method that protects U.S. waters from the harmful salt and other bi-products of standard clothing dyes). Earth Creations is donating 50% of of the proceeds from this special edition Earth Day t-shirt to the Weeks Bay Foundation.