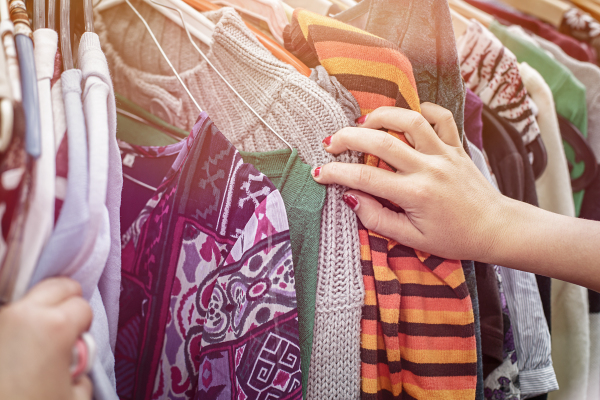 If you think your fast fashion addiction is justifiable because you always donate items to secondhand stores whenever you buy new items, guess again.

The Huffington Post reports that our fast fashion shopping addictions are taking a toll on secondhand stores. There’s simply too much coming in for these stores to keep up with, reports the Post:

One New York City Salvation Army store received about five tons per day in 2012. Last year, Salvation Army locations across the country took in 80 million pounds of clothing overall, according to Tim Raines, marketing manager for the organization.

The Council for Textile Recycling says the the U.S. alone generates around 25 billion pounds of brand-new textiles every year, with a whopping 85 percent of that winding up in landfills. The rest is what goes to thrift and secondhand stores like Goodwill and Salvation Army.

And these days, many of those items heading for secondhand stores were just on trend a season or two ago—meaning people are in a revolving door of clothes buying dictated by trends meant to be short-lived. That’s because designers and fashion magazines that rely on consumer sales to keep their profits strong, decide on the trends for us. It’s no longer in their best interest to make clothes you’ll want to wear for decades, even though that’s better for everyone.

Now, we’re buying so many new clothes items that secondhand stores can’t keep up with all the donations, and as much as 80 percent of what’s dropped off at thrift stores is being taken by textile recyclers and turned into rags. And while that’s better than those clothes winding up in a landfill, it’s still an overwhelmed system being stressed by our lust for fast fashion.

What might be most disturbing about this situation is that fast fashion is price-competitive with thrift stores these days. And why sift through a dusty thrift store when you can spend the same amount of money or less at your favorite mall store? That seems great in theory, but the treadmill of fast fashion perpetuates the cycle of disposable clothing, not to mention the poor labor conditions these brands employ.

Buyers do best for their wallets and the planet by investing in high quality clothing items that will last years or decades and being satisfied with fewer clothes in general. And when in need of new items, always shop secondhand first.