If you have or have had a child in grade school you’ve likely heard of Professor Carol Dweck. Or, at least, I hope you have.

Prof. Dweck believes in developing a growth mindset in our children. Growth mindset is the way we look at challenges and difficulties. It is, what Dweck calls, the Power of Yet. 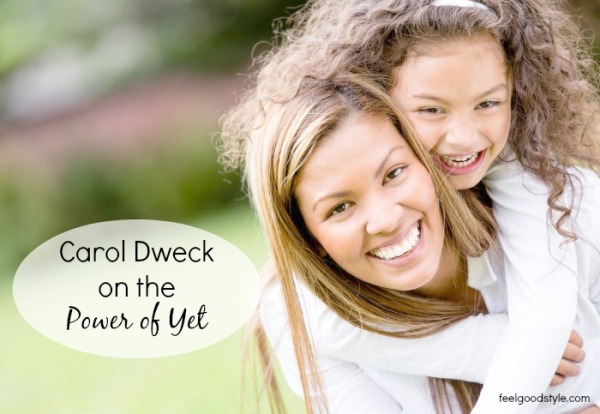 Sure, some people are born with a growth mindset. They look at difficulty as a challenge to take on. Others meet a difficult task with more of an I can’t attitude, not putting in effort to take on the challenge.

Prof. Dweck did a study with a group of 10 year olds, giving them math problems that were too difficult for them. Some were ready to meet the challenge, while other students felt defeated before they even got started. Worse yet, the defeated students said that they would likely cheat next time they failed an exam or seek out someone who did worse than them to make themselves feel better. And this attitude has carried over into adulthood. Employers polled stated that young workers these days need daily reward.

Where did this underachieving mindset come from? All of the undeserving praise and prize giving parents and teachers thrust on children over the past few decades. If you’ve ever been to a sporting event for small children you’ve probably noticed that they get something when they are finished playing. And I’m not talking about the good feeling of having participated in a fun game, win or lose. Nope, a treat or small “trophy” is usually handed out. Everyone wins.

But this is not reality. Everyone does not always win. And what about effort? Those who put in more effort should be the ones rewarded, even if that reward is only the good feeling of giving it their all. By constantly showering our children in false praise we are setting them up for a losing mindset as adults. And you can believe kids know the difference between earning something and not.

The good news is, a growth mindset can be learned. It is all about how a difficulty is processed, learned, and corrected. Prof. Dweck’s recommends praising wisely. Rather than a general good job, applaud how they did the task, their effort, focus, improvement, or persistence. This creates better strategic skills, perseverance, and confidence.

It has been found that when pushed out of our comfort zone the neurons in our brain form new connections. Effort actually transforms the brain to see things differently. As Dweck says, the meaning of effort and difficulty is transformed.

It is amazing that kids who were taught the Power of Yet showed a rebound in grades. Not so unbelievable that kids who chronically underperform feel it is inevitable that they will fail, and others start to look at them this way too.

Professor Dweck challenges all of us to stop wasting more time and support a growth mindset in our children, and in ourselves. She says it is a human right for children to live in a place that creates a growth mindset. A place filled with yet. We owe this to our kids.

Have you read Prof. Dweck’s book Mindset: The New Psychology of Success? If not, it is a good one for your 2015 reading list.