Just days after Project Runway’s Tim Gunn sent a message to Donna Karan asking her to ditch the use of fur in her collection, the company has announced that her fall 2009 lines will be fur-free with “no plans” to use fur in the future. 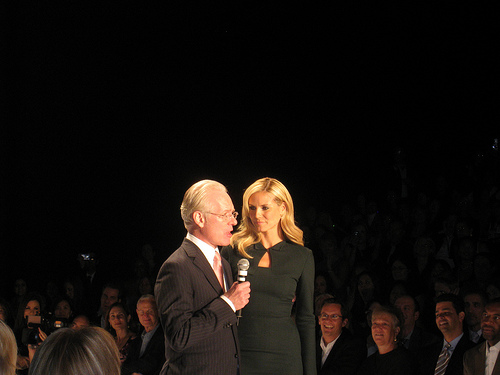 From the Grim Reaper standing outside Karan’s boutique and runway show antics, to being deemed “The Bunny Butcher”, PETA has been on Donna Karan’s case for quite some time to protest the use of fur in her fashion collections.

Recently, PETA teamed up with Tim Gunn to inform the public of the horrors or the fur industry, while also targeting designers Donna Karan and Giorgio Armani who have continued to use rabbit fur in their collections, despite PETA’s requests. The collaboration seems to have been successful, and Donna Karan made her fur free announcement just days after receiving the message from the fashion guru.

This isn’t the first collaboration between PETA and Gunn, while he was the chair of the Department of Fashion Design at Parsons School of Design, Gunn started a program allowing PETA representatives to give presentations to students so that they could see what happens to animals who are tortured and killed for their fur.

A recent PETA investigation includes video footage showing workers at a Chinese farm pulling rabbits out of cages by their ears and shocking the screaming animals in the head with a handheld electrical device, often multiple times. Rabbits with slit throats can be seen twitching and shaking, with their eyes wide open, before they die.

Join Tim Gunn in his pledge against fur by visiting the online petition at PETA.org.

Melissa Elliott is a freelance writer based in San Francisco. Her personal blog, TheUrbanHousewife.com, documents her culinary adventures from her kitchen to vegan food around the world. When she's not glued to her computer or on the road, she loves to spend time with her husband, Ryan, cats Beamish & Scurvy, and beloved chihuahua, Strummer.