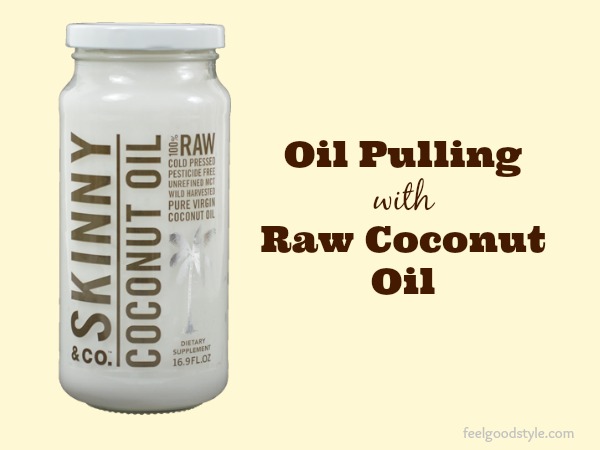 New to oil pulling? Find out whether or not coconut oil pulling is for you.

I recently received a bottle of Skinny & Co. Raw Coconut Oil to sample. Cool! I’ve used coconut oil before to cleanse and moisturize my skin, so this was not a new-to-me item. But when I checked out their website I found they were doing other things with it. Like coconut oil pulling.

Safe to say, coconut oil is a popular ingredient right now. Used in cooking, beauty, even wellness, it is a versatile and healthy oil. But coconut oil pulling is new to me. While I’ve used coconut oil in the past to cleanse and moisturize my skin and have even done a little cooking with it, oil pulling has never been an area of interest.

What the heck is coconut oil pulling?

Coconut oil pulling first thing in the morning is said to boost the immune system and promote oral health. You simply place a small amount of coconut oil in your mouth and swish. Easy, right? And then keep swishing for another 5-20 minutes. That is a lot of swishing. (Skinny & Co. offers more in depth instructions on the practice.)

Whiter teeth being one of the touted benefits of oil pulling, I decided to give it a go. It wasn’t as icky as it sounds, but not something I’d look forward to doing each morning. My teeth were not noticeably whiter, but that probably takes consistent use.

Ok, so coconut oil pulling may not be my thang. Still, this oil is perfect for the skin (makes a super great lip balm!) and in foods. I ran across this awesome looking pumpkin granola recipe  that uses coconut oil on my Monday Pinterest crawl that is a fall must-make.

Skinny & Co. does not mess around. To the brothers who started this business, coconut is more than just a product. It’s a movement. A backpacking expedition that began as an adventure, led Luke and Matt Geddie to the wealth of healthy foods native to Vietnam. They made it their mission to share the pure, raw coconut oil from the Ben Tre jungles to America. A partnership that brings a healthful product to local businesses here in the US while benefiting the people of Vietnam.