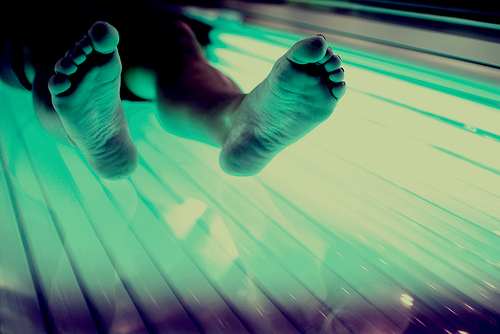 A little while ago, there was talks and proposals of banning tanning for anyone under the age of 18 in California. Just this past weekend, Governor Jerry Brown signed the bill banning the use of ultra violet light beds for anyone under 18. The bill was part of a larger grouping of legislation designed to make California healthier. The law will go into effect on January 1, 2012.

Some folks seem to be divided on tanning bed usage. Some say using them isn’t nearly as harmful as the medical community claims and others are appalled at their frequent usage. There is no arguing that any length of exposure, sun or ultraviolet, can potentially lead to cancers and other skin related problems. Another argument being raised is the one of government overstepping their boundaries in a way and taking away the freedom of choice. I can understand and somewhat “side” with both sides of the spectrum. I don’t believe that tanning is the best thing for your skin or health but I do believe that we, or the guardians of minors, should be allowed to make those decisions.

Not everyone is in favor of this ban, as to be expected, but I believe that the intentions in this law are good. What do you think? Do you believe that tanning should be banned to anyone under 18, much like cigarettes? Do you feel that this is an over reach of the government? I would love to hear both sides of the argument on this topic! Feel free to leave any comments or links.