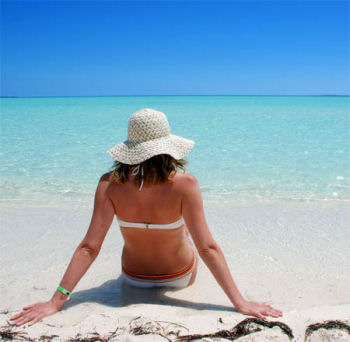 Summer 2013 is upon us, and The Environmental Working Group has once again released its hugely popular annual Sunscreen Guide, bringing with it a new season of debate regarding sunscreen ingredients and safety. As the owner of a store specializing in non-toxic beauty and personal care products, you can imagine the sheer volume of questions we receive on this topic. Which is why, each year, I do my best to gather all the bits and pieces of info I can, bundle it up, and deliver it to you, my savvy reader.

This year, I want to hone in on the topic of nano particles in sunscreen. I have tackled this topic before, but since the debate rages on, it seems worthwhile to talk about it again. At the core of the controversy is the concern that nano particles – i.e., teeny tiny little pieces of minerals, plastics, etc – are so small they can pass through the skin and enter the bloodstream. The concern is legitimate: Some nano particles almost certainly can and do make their way into our system, and companies aren’t required to do any safety testing before using these microscopic ingredients.

But here’s the thing. You see, while there is little research regarding the safety of 98% of chemicals used in beauty products, there are over 400 research studies on nano zinc oxide and nano titanium dioxide – the two primary nano ingredients used in sunscreens. The evidence is overwhelming: Neither nano-zinc oxide nor nano-titanium dioxide enters the bloodstream when used in creams and lotions (they can, however, if inhaled, although there isn’t much research to substantiate that claim, either). Keys Care co-founder and walking sunscreen encyclopedia, Bob Root, has long expressed his concern about the pervasive fear of nano-particles in sunscreen, and provides a list of the existing body of research on the topic here. Root also makes the case for why nano-zinc oxide may provide better UVA and UVB protection than many non-nano versions of zinc oxide, which I discuss in a previous article I wrote on sunscreen safety.

Despite the evidence, however, the concern over nano-sized oxides remains, and most “eco” sunscreen brands have opted out of the use of nanoparticles (well sort of, but I’ll get to that later), emphasizing the use of “non-nano” in their advertising. But if the research overwhelmingly supports the safety of nano-sized oxides in sunscreen, why do consumers still demand – and companies still use and highlight – non-nanoparticles in sunscreen, especially if protection from the sun’s rays might be better with the smaller minerals?

To find some answers, I reached out to a few companies that make the “non nano” claim. A representative from Badger – arguably the most well-known 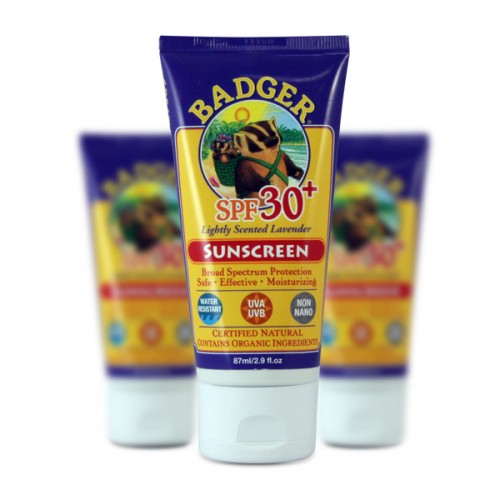 natural sunscreen brand – emailed me back right away, directing me to their “treasure trove” of information. Truly, it is one of the most comprehensive collections of information on sunscreen I have ever encountered. I highly recommend bookmarking it and sharing it with friends and family.

But back to the question at hand, regarding the emphasis on non-nano oxides. First, here is Badger’s statement on nano-zinc oxide and safety (keep in mind that they do not use nano-zinc oxide):

One comprehensive review of the scientific literature shows that nano-particles of zinc oxide greater than 30nm do not exhibit properties any different than those of larger non-nano sized particles. Science overwhelmingly shows that particles of zinc oxide greater than 30nm, when applied to the skin in a lotion or cream based product, do not get absorbed into the body, do not enter the bloodstream, and are not a threat to human health.
It’s important to note, by the way, that nano-zinc oxide used in sunscreen is almost always larger than 30nm, with a typical range of 30-100nm. There is even some preliminary research suggesting that oxide particles as small as 10nm can’t enter the bloodstream.

It’s also important to note that there is no official requirement in the US regarding what is nano and what is not. But I’ll get back to that in a moment.
Now, here is Badger’s statement regarding why they choose not to use nano-zinc oxide:

First, many of our customers asked us to stop using nanoparticles in our sunscreens. Second, we discovered a new way of working with larger particle zinc oxide that makes our sunscreens just as effective while using less zinc oxide. Our sunscreens are now even less whitening than when we used the smaller particles. 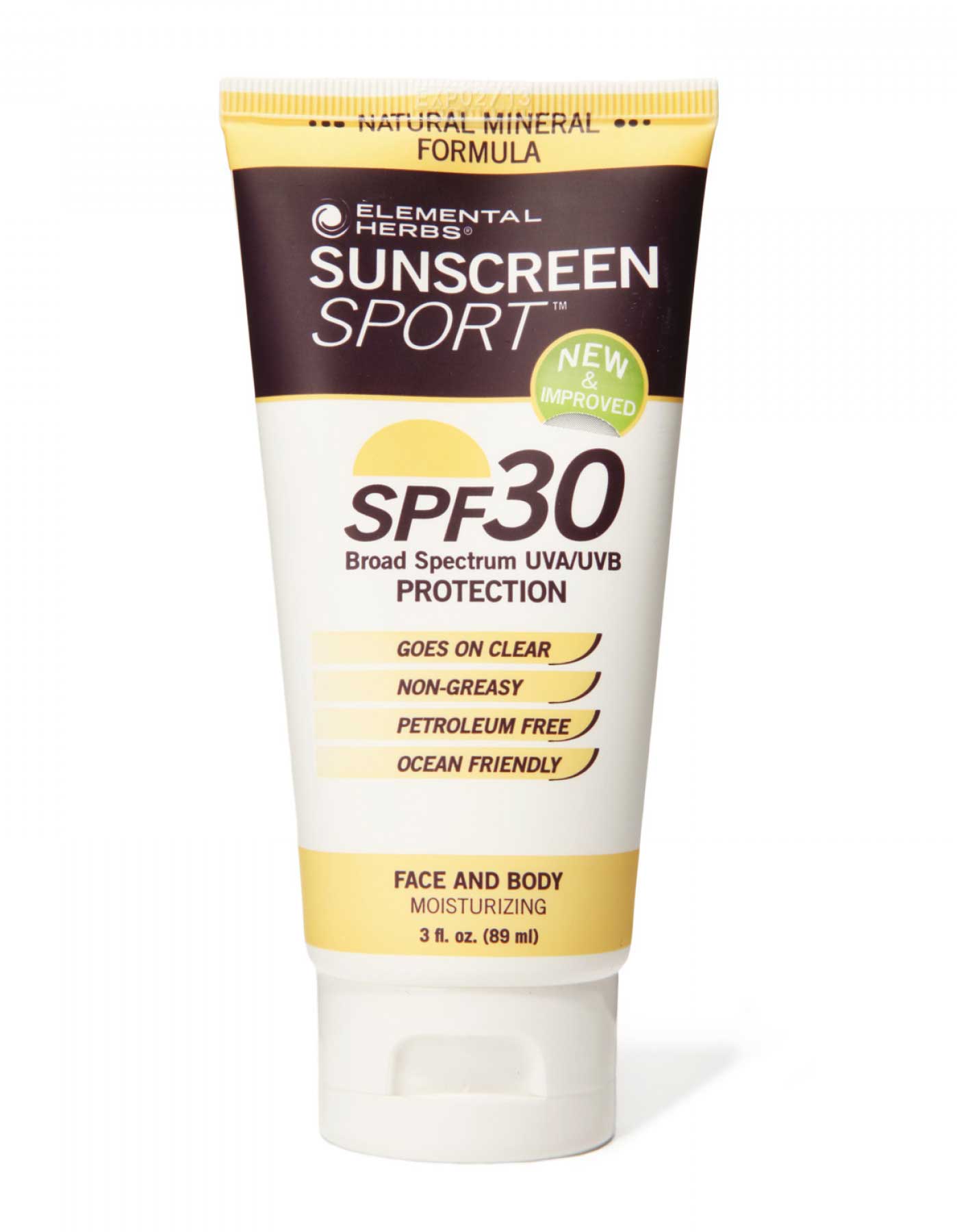 To me, this is critical. Huge, even. They stopped using nanoparticles not because they are unsafe, but because consumers think they are unsafe. As for the second part, well, the biggest complaint I hear about the truly non-nano sunscreens is that they tend to be thicker, greasier, and whiter than the nano-based stuff. The least greasy, least white, non-nano sunscreen I’ve found to date is Elemental Herbs, a company that, like Badger, goes to great lengths to ensure the zinc oxide particles are greater than 100nm. However, when I asked their representative why they use only non-nano zinc, her reply was the same as Badgers’: Because that’s what consumers will buy. Safety has nothing to do with it.

Now, don’t get me wrong: Both Badger and Elemental Herbs are great companies, making great products full of clean ingredients, with comprehensive science and attention to detail in the formulation of their products – I wouldn’t hesitate to recommend either brand to anyone, and use both on myself and my kids. And they have gone to extraordinary lengths, devoting many years and even more money to making non-nano zinc oxide sunscreens as lightweight and clear as possible. But personally, I still strongly prefer the clearer, lighter consistency of a nano-zinc sunscreen, and my ultra-fair skin needs the best protection it can get, which I think points to nano zinc oxide. My Ethiopian-born daughter, whose skin turns the color of ash when using non-nano zinc sunscreen, would also love more nano-zinc options. But a consumer-driven fear of nano-sized oxides has made those choices scarce.

What’s even more problematic, though, is that the whole green beauty movement was born in part out of the concern that most chemicals used in beauty products have never been tested for safety. And yet, what incentive is there for companies to invest in the research, when we completely disregard the results if they are inconsistent with our pre-drawn conclusions?

Of course, in this unregulated, commerce-driven world we live in, companies can almost always find a way around anything. I’m obviously not the only person out there who would love a natural, safe, lightweight sunscreen that doesn’t leave a whitish glow (above and beyond the one I’ve already got goin’ on, at least). Consequently, many natural sunscreen brands simply use nano-sized zinc oxide and call it non-nano zinc oxide, because they can. Problem solved! To be fair, they were most likely told by their zinc oxide supplier that the particles are non-nano. But still. You get my point. Even the EWG has confirmed this bit of semantic smoke and mirrors (from the EWG Annual Sunscreen Report page on Nanoparticles in Sunscreen):

While there is variation in particle sizes among these manufacturers, nearly all of their ingredients would be considered nanomaterials under a broad definition of the term, including the definition proposed in 2011 by the federal Food and Drug Administration (FDA 2011).

Or as Bob Root simply puts it, “If it goes on clear, it’s nano.”

Now I realize this is all fairly complicated, and the topic very controversial, so let me attempt to summarize my understanding of the situation: 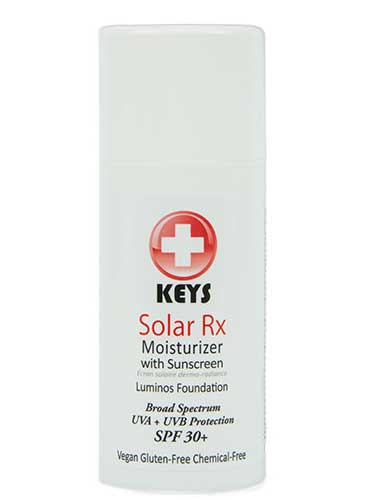 Nano-particles of zinc oxide and titanium dioxide do not enter the bloodstream, with over 400 studies supporting the same conclusion. These smaller particles may provide better UVA/UVB protection, and in no way provide less. Sunscreens that use nano-particle oxides (like Keys Solar Rx) go on clear and are more lightweight in texture. The majority of consumers looking for safe and natural sunscreens continue to demand non-nano oxides in their sunscreen because they believe nano-particles in sunscreen are not safe. So companies either use actual non-nano oxides, even though they, too, believe that nano-sized particles would be better, and spend tons of time, money, and effort trying to make the product as appealing as possible within the confines of larger minerals. Or they use nano-sized particles (wittingly or un) and legally advertise them as non-nano.

Am I the only one who thinks this doesn’t make sense?

I want to be really clear here that I totally understand the desire to use safe products, and the skepticism that comes with repeatedly being misled about ingredients and safety. It’s why I do what I do for a living! Better to be safe than sorry, right? And yet, how is demanding something that isn’t actually safer than a potentially more effective alternative being safer?

And now I turn it back to you, savvy reader. What do you make of all of this? Would you buy sunscreen that uses nano-sized oxides? Does the research influence your beliefs about sunscreen and safety? If not, why not?

Of course, there is no debate that the best protection you can get from the sun is the shade, followed by UV protective clothing. Thankfully, it’s not nearly as hard to find UPF clothing you’d actually be willing to wear in public as it was even 5 years ago. Athleta has a great selection of cute, stylish sun-protective apparel. REI also has a great selection, including a ton of options for kids.

Have a great summer!

Terri Bly is the founder of The Nature of Beauty, LTD, an all-eco website, shop, and spa. She is a freelance writer, currently residing in Minneapolis.