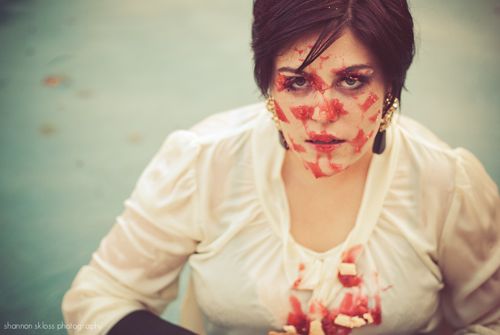 Nancy Upton answered the call to American Apparel’s plus size model campaign, but it wasn’t what they wanted to hear!

Ever since the post here on Feelgood Style about a curvy model in Glamour, this site and myself have been fired up. As a curvy woman myself, size 16, I tend to ignore or gloss over the images that are ever-present in the news, magazines, and on television. It’s sad to say, but I think my mind just ends up being on auto pilot. When a “real” woman is thrown into the mix, I perk up and then realize that it’s sad that I’m perking up at all. The under-representation of fuller figured, and albeit average, women in nearly any form of advertisement or media is disheartening.

What I find to be more disheartening, though, is when a company decides to exploit or bank on the idea of plus size women not being represented and use that to their advantage. Some of you may or may not have seen the photos that Nancy Upton submitted to American Apparel for their plus size modeling contest, you can check some of them out on her blog.  The contest, titled “The Next Big Thing”, was constructed to find the next great “booty-ful” model for some of their clothing. In an article from The Daily Beast, Nancy explains what her thought process was when deciding to enter the contest. She entered, won, and then was ultimately not chosen because the company felt as though they wanted a more positive face for the campaign. The language that they used for the campaign and contest, XLent and booty-ful(?), are condescending and her photos answered to that tone. Bathing herself in ranch dressing and eating pie was just a photographic manifestation of how it seems most companies and some people look at full figured women. So, when is this mindset and prejudice going to change?

Body positivity is an ongoing struggle for nearly every woman, of any size. It, unfortunately, feels like the idea of curvy women being used for campaigns, ads, and photo spreads will always be news. It will always be something that needs to be noted because it won’t become the norm.

How can we change this? What can we, as women, do to make this different? Should we let our dollars do the talking, or does it need to be more? I would love to hear about how you think we can change the idea that an average woman in a magazine is newsworthy and move into acceptance, and love, for all body types. Feel free to leave any comments, questions, ideas, or suggestions!

[Image via That’s Not Our Demographic]