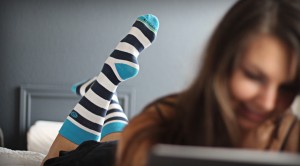 You’ve probably heard of TOMS shoes‘ buy-one-give-one business model that has swept the market. Here is another way to treat your feet to some seriously good threads: Mitscoots.

Mitscoots sells socks that are made in the USA, gives socks to the homeless and others in need, and employs homeless and disadvantaged people to package their products in Austin, Texas.

Mitscoots sells performance socks for runners and athletes and hip, patterned socks that anyone would be happy to have in their sock drawer.

“Socks for the homeless is a short-term solution to an immediate problem. The real issue is those in need not being able to provide for themselves,” said Mitscoots Founder Tim Scott. “We would rather give a pair of socks today and see how we can get someone up on their feet, so they can get their own pair the next day.”

Scott became aware of the need for socks when he and his wife volunteered as students at Austin homeless shelters. They went on to earn their degrees, and Scott started work at an advertising agency. He hatched the idea for Mitscoots and launched a crowd-funding campaign, which was successful. He quit his day job, and Mitscoots was established in 2012.

The socks are sold primarily online and in select retail stores in major cities, such as Denver, Huston, and Chicago.

Scott said it is a daily challenge to work with the packaging staff, who he hopes will take the job as an opportunity to turn their lives around for the better. The challenge also brings him a tremendous sense of accomplishment that he never had in his previous advertising career.

“The only thing I ever regret is that literally I did not do this sooner,” Scott said. “It’s not super lucrative at all, but it is deeply heart-warming. I don’t ever go to bed and wonder if today mattered. And I haven’t had that since I was in the military, so it feels good to have it again.”

Scott said that a small percentage of the population Mitscoots serves is the stereotypical homeless man on the corner. About 40% of the homeless population are children, and many homeless people are working 40 hours a week, but can’t earn enough to pay rent, he said.

For example, a mother working in a restaurant that relies on tourists may be laid off for a month when the tourist season slows. During that month, her family will need to move into a shelter.

“She can’t get a month-to-month rental, so now she’s just dropped one more echelon in life difficulty. It’s a long, long road of slowly going down so many notches; she might get into substance abuse and psychological issues, and it just keeps going down and down,” Scott said. “We’re just trying to be part of the spiral back up.”

Practicing gratitude, living simply, communications and journalism geek, susty is my style. Wife and mom to the two best kids in the universe. Clean, mountain air and mineral water are my favorite commodities.