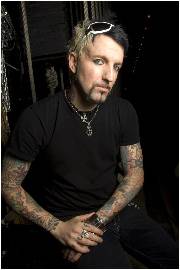 Johnny Colt is not your typical musician. Although he was once a member of The Black Crowes and is now a member of both Train and Rockstar Supernova, Johnny is, among other business ventures, the creator and principal partner in two real estate development companies which own over 650K of commercial real estate. Currently, he is working on an adaptive reuse project – which means is that an existing building once used for another purpose will be converted into either homes or another business. For example, one of his projects is a 50,000sf four-sided brick former furniture warehouse that was converted to commercial loft office warehouse/flex space. It’s the perfect green solution – use what’s already there and not being used. The building will include green objectives as well.

I had the chance to ask Johnny a few questions about his endeavor:

Take me back to when this whole green thing started for you.

Frankly, it has been a very slow evolution – my wife has been trying to drag me forward for a decade and I’m really just getting the hang – “Battleground Earth” put me in hyper-drive.

(Side note for those of you who don’t know: Planet Green challenged Chris “Ludacris” Bridges and rock superstar Tommy Lee to battle as they travel cross country in 10 episodes to convince people to become more environmentally friendly in their lives. This battle culminated in a green carpet benefit concert at Los Angeles Greek Theater.)

The challenge on “Battleground Earth” was to explain to people that we’re not saying we are experts. We are here to learn and want you to learn with us – that concept took a minute. The new model rockstar is much improved – he knows he will live to see 60 and he puts a little away for a rainy day between all the blow and hookers.

You have rehabbed buildings and made them green (which, by the way, “The Complete Idiot’s Guide to Green Building and Remodeling is the title of my new book coming out later this year!). What’s the biggest challenge you’ve faced?

Wow! Can I get an early look at your book? I need all you can teach me!!!

The biggest challenge is making it make financial sense – it can be a challenge to partners and investors to believe there is a culture out there, defining themselves through these products – the idea that you reduce risk by giving MORE isn’t everybody’s favorite business model.

What do you think is the biggest misconception about being green?

That being green is for hippies. Please, there is nothing more punk-rock (D.I.Y) than getting off the grid — not paying a utility company because you have solar panels is hard core! Rock-n-roll is about following your own voice and never letting anyone tell you what or who to be – reducing your footprint is all about not playing corporate America’s game. Conscious living and being awake to the choices you make is powerful self reliance.

You have a daughter and you ride tandem with her to school. Tell me about that.

The concern for the planet my 8-year-old shows is deep and very real. When I was 8, it was nuclear war and the Russian bear – for these kids it’s an apocalyptic planet destroyed by their parents over consumption. The aesthetic of hybrids hasn’t caught up to my taste, so I decided I would roll on my bike most of the week, and when I do drive – I drive what I want. It’s all about personal choices. You choose how you make a difference. I love that.

Do you really think people are really listening?

I think most people for better or worse are moved by their wallet (like their vote). When something makes emotional sense, financial sense and just plain common sense – its tipping point is inevitable!

Lisa Iannucci is a 20-year veteran of magazine and book publishing, having written articles for USA Weekend, Shape, Parenting, Frequent Flyer, Los Angeles Times Travel Section, and more. She is a contributing writer to The Cooperator (www.cooperator.com), a publication for co-op and condo owners and management companies, for all of their editions (NY, NJ and Boston). Topics include property management (including working with board members and staff, continuing education courses, maintenance of building systems, the greening of building systems, energy conservation, energy alternatives, green remodeling alternatives, green decorating and more).