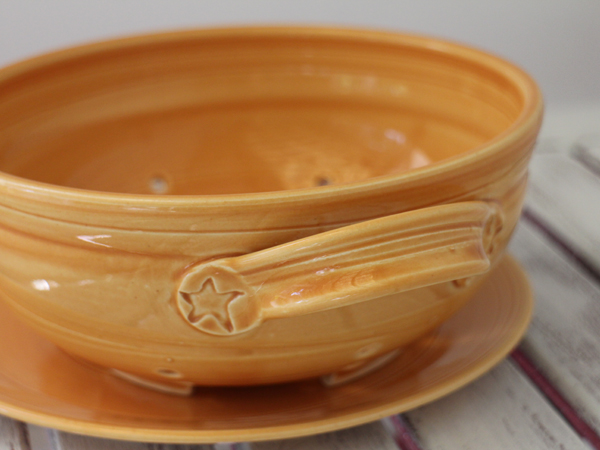 I am a big fan of practical art. Artwork that one uses everyday while going about regular life brings beauty to the mundane. One of my favorite practical artists is potter Jeanette Zeis. Based out of Portland, Oregon, Jeanette has been making pottery full-time since 2008. Her beautifully crafted work consists of houseware items like bowls, platters, plates, cupcake stands, jars, berry bowls, and hanging baskets. With a clean, feminine aesthetic, her pottery has a playful yet classic touch.

A vegan herself, Jeanette also has a line of vegan-themed pottery called VeganDish.   Most of these pieces are stamped with the word “vegan.” Included in the line are lidded jars marked “nutritional yeast” to contain the much beloved ingredient that is a mainstay in vegan cheeses and sauces.

I contacted Jeanette to find out more about her work, history, and process: 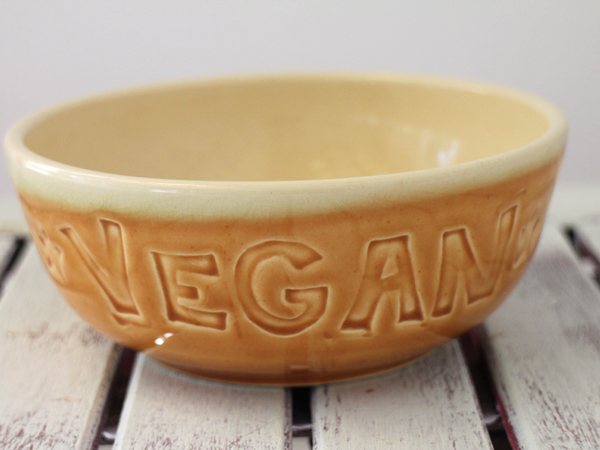 How did you get started making pottery?

I attended summer school in high school for one year. I took pottery and typewriting – the two skills I use on a daily basis. After that class, I took classes and workshops at various art centers while in high school and college. I had a fantastic mentor for several years who had a home studio. I learned about loading a kiln and mixing glazes from her.  She also had an influence on the rest of my life – she was probably the first vegetarian that I knew well. And when I became vegan, she was very supportive. I did not know any other vegans at the time, so having someone who understood veganism and respected my decision to be vegan was a big deal. Thank you Marilyn Dale of Warwick, NY!!What inspires you creatively?

Inspiration is a funny thing. It can strike at odd moments or leave you languishing on the couch. For the most part, I find that making work inspires new work. I adore the process of pottery and there are always new tangents to explore. Lately, I have been attempting to bring more pattern and color into my work. I have been researching folk patterns and hand lettering. Right now, it is in the exploratory phases and the work is just for me. But hopefully, I will feel comfortable sharing more of that work soon. What is the hardest part about making pottery?

Keeping the studio clean. Ha, ha!  But really, I find that finding a balance between my more “commercial” work and my more “artistic” work can be difficult. There is a constant battle between fulfilling orders and wanting to take the time to try new avenues of expression. I think this is probably a struggle that lots of working artists (no matter the medium) encounter. How did you come about making a vegan-themed line of pottery?  What has been the response?

It started with a commission for a dinnerware set with food words on the items – things like “shiitake” and “scrumptious.” From there, it was just a natural progression. Encouraged by my partner, Kenn, I made some “vegan” items. And our friends Ken and Leigh Saluzzi were kind enough to sell them in their online store – Cosmo’s Vegan Shoppe (now closed.) I also started selling them in my own etsy shop. The response has been amazing. It has introduced me to so many vegans all over the world. And I am just so pleased that the items are in vegan homes and office cubicles. As a potter, what do you admire most in the work of other potters?

All of it. Really. Anyone that is making pottery, no matter the skill level, has my admiration. It can be a frustrating craft to learn and the gumption that it takes to stick with it is admirable to me. Other than that, I’m generally drawn to work that is different from my own. Pottery that I purchase is usually either wood fired (a process very different from my own electric kiln) or highly illustrated. I enjoy work that is well-crafted, “tight,” and shows an attention to detail. But at the same time, I also enjoy “looser” work that allows for spontaneity in the process. Basically, if it is made of clay – I like it.