Not too long ago, we shared a map that rated states based on residents’ reported happiness levels, and some new Gallup polling data is looking at happiness form another angle by examining optimism.

The good news is that even in the bottom five cities for optimism, 40 percent or more of the people polled said they felt like their cities were getting better. In the most optimistic cities, between 66 and 74 percent felt this way. Raleigh, North Carolina tops the list when it comes to optimism in large cities, and Las Vegas is at the bottom. If you take smaller cities into account, Provo-Orem, Utah is at the top with 76 percent, and Bingamton, NY is at the bottom with 28 percent. It’s interesting that there’s such a wide gap in satisfaction in smaller areas compared to larger cities!

The analysis that I found really interesting was this little tidbit from Gallup:

…among the 10 most optimistic metro areas, only a trio — Provo-Orem, Raleigh-Cary, N.C., and Des Moines-West Des Moines, Iowa — also make the top 10 in overall city satisfaction. That is to say, the most optimistic metro areas are not necessarily those where residents are currently among the most satisfied with their city or area as a place to live.

So, what cities were in the top and bottom 5 large cities? Here’s the data from Gallup:

And here are the top and bottom 10 from all of the areas that they polled: 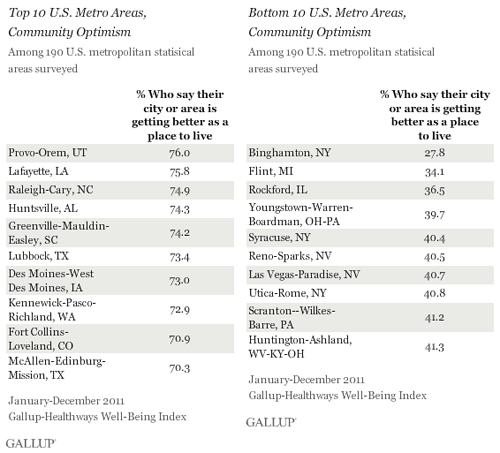 Was your city on this list? I’d love to hear your thoughts on why it made the top or bottom five, and how you feel about living there!