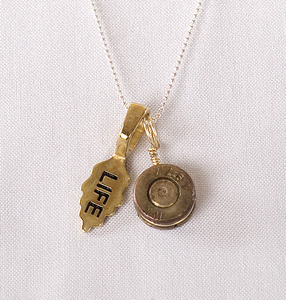 I recently discovered this sweet jewelry made from spent shell casings fired during the civil war in Liberia. Lovetta Conto, who was raised in a refugee camp, hammers the casings into a charm and presses the word “LIFE” into each one. She calls it Akawelle– AKA Wel’le- Also Known As Love.

Each necklace comes with the shell bottom as well. I put one on my wish list, and think it’s a great gift for anyone interested in supporting an ingenious female artisan who’s also turning something lethal into something hopeful.

The Strongheart Fellowship – located in Liberia, West Africa – provides extraordinary opportunity for exceptional young people from extremely challenging circumstances. Often displaced or orphaned by war, these are young people who have a marked “inner resilience” that has set them apart as remarkable potential leaders despite their conditions.

More about the designer Lovetta Conto, and the Strongheart Fellowship that supports women like her can be found here.

I always try to find things that are not only stylish, but also create employment in places where it’s least likely to be found, like most of Sub-Saharan Africa, as Edun is doing with apparel. Hand-crafted items that use traditional methods are especially valuable, because they keeps the traditional arts alive. It’s also vital to support female entrepreneurs in Africa, as time and time again it’s been shown that when women have an independent source of income, they’re able to assert themselves and better care for their children. So I’m glad to have discovered another great

Susanna is passionate about anything fast and electric. As long as it's only got two wheels. She covers electric motorcycle racing events, test rides electric motorcycles, and interviews industry leaders. Occasionally she deigns to cover automobile events in Los Angeles for us as well. However, she dreams of a day when Los Angeles' streets resemble the two-wheeled paradise she discovered living in Barcelona and will not rest until she's converted the masses to two-wheeled bliss.