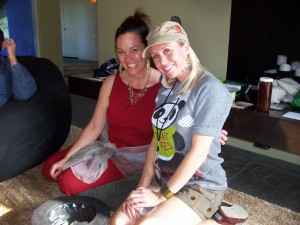 Paige Donner’s Greening Hollywood presented the EcoPreneur Salon with co-host Janine Johnson, founder of non-profit Greenwave Enterprises. “We recognize that global progress is unstoppable, what makes us different are our wholistic solutions vs. simply green solutions. Our solutions are green, sustainable, forward-thinking, and ever-changing,” states Johnson who is now touring with band Crystal Method.   Johnson’s day job is working for environmentally sustainable property developer Kalia Living whose eco-communities are centered in Costa Rica.

More on Marrakesh House: The 4,300 square-foot house uses similar layouts of traditional Moroccan “riads” which center on a courtyard, in a way that mirrors the layout of this property. The home combines Mid-Century modern architecture with Islamic design motifs to forge a visual bridge between two cultures. “It’s sort of Frank Sinatra meets Morocco,” explained Paine on a recent sunny afternoon when he toured EcoPreneur Salon attendees through his home.  This vibed perfectly with our event sponsors which included TYKU all-natural liqueur, O.N.E. Natural coconut water, Frey Bio-dynamic and sulfate-free wines from Mendocino County, and Luna and Larry’s Coconut Bliss, an organic, vegan, dairy and gluten-free ice cream like perfection of a confection. 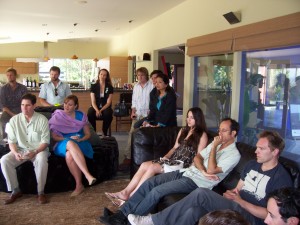 Paine enlisted artist Shrine, whom he describes as one of L.A.’s “best artists” to also paint blue the cement floor of the inner courtyard.  (Shrine also designed the Moroccan paneling throughout the home.) The result is a decidedly N. African yet aquatic feel which reflects the glistening swimming pool just beyond. Attesting to the setting’s affinity with nature, a pair of ducks have adopted the swimming pool as temporary haven. Paine’s creative team, including Shrine, is also building a temple-like structure just adjacent to the hot tub.

Marrakesh House opens officially on June 6th with a big benefit bash.  I’ve already heard of at least one wedding planned for the summer to be held there and, naturally, there are plenty of events already calendared.  At present the home is abuzz with creativity. It has the feel of a hive – an apropos analogy given that Paine has delightedly discovered a natural honeybee hive on his property. A treasure he has decided to keep in tact.  As a parting gift to EcoPreneur Salon attendees, Paine doled out sweet, waxy confections of the natural elixir.  It just doesn’t get any more raw or better or sweetly organic than that! 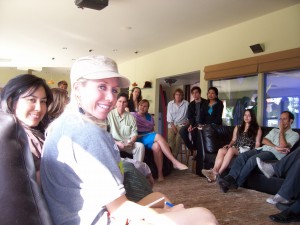 Also, a big Thank You! to Rogers & Cowan for their support of EcoPreneur Salon!