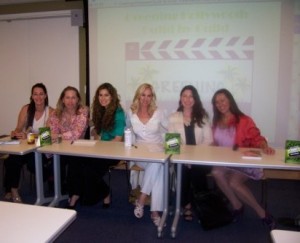 There’s more to bringing the beauty industry and green scientists together, all at one table, then might first meet the eye. By the time I presented our panel of beauty experts, moderated by Rachelle Carson Begley, last weekend in my Greening Hollywood: Guild by Guild seminar and workshop, I had learned a lot. I had learned more than just that Tarte has come out with a game-changing mascara called Lights, Camera, Lashes! and that O.P.I. had removed all three of the most harmful chemicals in their nail polish, and that Suki Pure has re-defined how to be profitable and committed to pure ingredients in the cosmetic industry.

What a lucky stroke that EMA, the Environmental Media Association, came before me. The organization that Norman and Lynne Davis Lear founded 20 years ago has made inroads into almost every facet of “green” – including the billion dollar make up and beauty industry.

Of course, the first I thing I did, was go to Debbie Levin, president of EMA and tell her what I intended to do – namely present a panel of natural and green beauty experts for members of the Hollywood Make Up and Hair Stylists Guild – I.A.T.S.E. Local 706. Her colleague, Lisa Barnet, recalled they’d done something similar in 2006 though not for guild members specifically. It had been well-received but for whatever reason they’d chosen to do it as a one-off.

In the past three years lots has happened in the beauty world turning parts of it a deeper shade of green. For one, Oprah got on her show and talked about the terribleness of parabens in beauty products. That was a wake up call to women across the nation to look at the ingredients list in their beauty products. Secondly, California has since passed our Safe Cosmetics Act which is a piece of legislation aiming towards regulating the make up and beauty industry. The scientists from Environmental Working Group and Campaign for Safe Cosmetics who spoke on my Greening Hollywood: Guild by Guild panel are quick to point out that there is NO FDA regulation of the ingredients put into cosmetics. Even though our skin acts like a sponge, absorbing whatever we put on it – nearly as much as what we put directly inside our bodies.

Now, when you’re an underfunded non-profit such as EWG and Campaign For Safe Cosmetics (a.k.a. breast cancer fund) and you’re going up against well-established cosmetic companies who have big slices of the billion dollar beauty industry, what do you do? Well, if you’re Lisa Archer (CFSC) and Becky Sutton, PhD. (EWG) you simply tell it like it is. AND you create a ratings system called SkinDeep.org where consumers can go to search and see how their products rank in terms of harmful ingredients. Their perspective is a consumer’s advocate one.

This is where the friction between cosmetic companies – both big and small – and these research non-profits rears its head. I contacted one cosmetic company to ask its CEO to speak on our panel and got an earful about the EWG and CFSC. This particular company is known to be one of the cleaner cosmetic companies and donates its profits to charity – all of its profits. They are on the smaller side as cosmetic companies go. I quickly was informed how they’d nearly been put out of business because of information pushed out to the public regarding their trace amounts of lead in a few of their lipsticks.

Now the issue of lead in lipstick is a big one. Last year California narrowly defeated a bill that would have disallowed the sale of lipstick in our state even with trace amounts of lead in it. Most cosmetic companies that you recognize when you walk into a department store have product lines that they sell in Europe – including lipstick with NO lead in it. So, it doesn’t seem to be a stretch for them to just introduce those products here and phase out the ones that are perceived to be harmful to our health. But, no. Alas, a handful of the biggies lobbied successfully last year and defeated the California bill that would have disallowed leaded lipsticks in our state.

Interestingly, the smaller company I referenced above, who is not a California company, did reformulate to take out all lead from their lipsticks. But she nearly went bankrupt doing so. She explained to me that there is more lead found naturally in a bar of chocolate than in a whole tube of her lipstick (before reformulation). And what the scientists apparently forget to consider is that someone, especially some of us women, can and will sit down and eat a whole chocolate bar. But never do we eat a whole tube of lipstick. Surely not in one sitting!

The point being that the SkinDeep rating system is an extremely useful tool. It does have its fallacies, however. Namely that it is self-rated. So a company whose CEO is honest will submit all its ingredients factually and candidly and get a certain rating. Whereas another company more savvy with playing the SkinDeep system, will submit only those ingredients they know to be rated safe and simply omit the harmful ingredients so that their ranking is strong on SkinDeep. They know that there is no auditing mechanism. Whatever they say is what their rating will be based on.

That said, when speaking with the President of Local 706 I.A.T.S.E. the Make Up and Hairstylist’s guild, she emphasized what a concern health issues are to her and her membership. Many guild members work long 12-14 hour days inside small trailers or otherwise enclosed spaces. To be inhaling noxious fumes and chemicals for long periods like that is not healthy and only time will tell what sort of ailments come of it. Similarly, many actors and actresses are also subject to vast amounts of chemicals in the form of beauty products being applied to them. One of our panelists, Nikoletta Skarlatos, a guild member, spoke about the use of prosthetics and how the industry is formulating natural-based prosthetic make up as an alternative.

Robert Hallowell, the “kitchen beautician,” another of our panelist’s and also a 706 member, acknowledged that a natural and effective hairspray is the Holy Grail of hair products. His line of hair care products, “Prawduct,” is all natural-derived and from recipes he cooked up in his kitchen.

Christina Marcaccini, who founded Raw Natural Beauty based in Manhattan Beach, spoke on our panel saying that when necessary companies have to re-formulate their products. If for no other reason than to capture the growing consumer demand and burgeoning market share that safe and pure ingredient cosmetics now command. L.A. – based O.P.I. nail polish company did this and removed three of the most toxic ingredients in their nail polish. The scientists see this is a victory and O.P.I. still has a huge slice of the nail polish pie. Girls won’t stop using make up – after all, most of us girls just want to play. But we can play safe and we can do so by choosing products that contribute to our beauty – both inside and out. And when needing a boost to go within, try Buddha Nose balms and aromatic sprays. Serenity in a bottle.