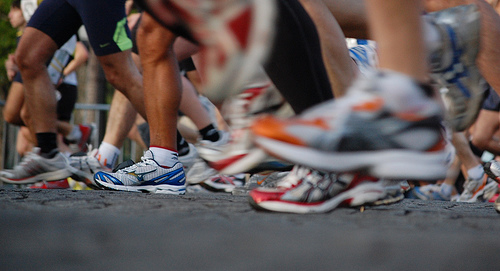 “What was the secret they wanted to know, in a thousand different ways they wanted to know The Secret … it had not so much to do with chemicals and zippy mental tricks as with that sometimes heart rending and un-profound task of removing, molecule by molecule, the very tough rubber that comprised the bottom of his running shoes. The Trial of Miles, Miles of Trials …”

John L. Parker – Once a Runner

Don’t send your kicked pair of running shoes to the dumpster! Donate them instead to one of these organizations that takes old running shoes and gives them a brand new life.

There’s no doubt that as runners, we have a special attachment to our running shoes. As my spouse frequently reminds me, I have a huge collection of shoes, each with their own particular use: Trail running shoes for off road training, well cushioned shoes for putting in mileage on the roads, lightweight trainers for road races and even a beat up pair of spikes for those increasingly rare track races. After all, a runner’s shoes are like a baseball player’s glove or a tennis player’s racquet. They’re the fundamental equipment of our sport.

Despite all this, we subject our shoes to a tremendous amount of wear and tear over time. And then, when they’re no longer useful we simply throw them away like any old piece of junk.

Fortunately, though there are more productive things we can do with our old shoes that are both environmentally and socially responsible.

Shoes that are truly beat up and past their prime can be given new life through Nike’s Reuse-A-Shoe program. This program takes old shoes and breaks them down into their primary components for reuse in other applications.

You can drop off your shoes for recycling at any Nike or Converse store in the United States and many others throughout the world. The old shoes are recycled, along with pre-consumer material, which includes shoes that aren’t fit to sell due to defects and assorted scrap from the shoe manufacturing process.

The shoes are then broken down into three components: the rubber from the soles, foam from the midsole and the fabric used in the upper. These materials are then recycled for use in different applications.

In this way, every part of the shoe is re-used in a worthwhile sporting application.

The Nike Reuse-A-Shoe Program has collected and recycled over 25 million shoes worldwide.

If your shoes are still in relatively good condition, another option is to donate them to someone in need.

One World Running is a not for profit organization based in Boulder, Colorado. The program collects new and nearly new running shoes, T-shirts and shorts and distributes them to needy athletes and children throughout the world. In addition, they also promote health and fitness throughout the world by sponsoring fun runs in many underprivileged locations.

The organization was started in 1986 and was originally known as Shoes for Africa. It was the brainchild of Michael Sandrock, a sub 2:30 marathon runner and journalist upon his return from a trip to Cameroon where he saw firsthand the need for proper running shoes among not only the athletes, but also the children and general population.

As time went on, the program expanded outside of Africa and they now do a significant amount of work in Central America and some areas of the United States as well.

One World Running accepts shoes at many local running stores. The shoes should be washed and air dried, since the heat that comes from clothes dryers can melt the glue used to hold the shoe’s foam and rubber components together. Shoes that are too worn out to use are sent to Nike’s Reuse-A-Shoe program.

The program also raises cash, every $195 raised sends 50 pairs of shoes to Africa or 100 pair to Haiti and Central America.

It can be hard for runners to finally give up on an old pair of shoes, but supporting these programs gives you an opportunity to contribute to a worthwhile cause while breathing some new life into your old shoes. Sounds like a win-win to me!

Author Biography
Jacquie is a avid jogger who is always looking for something that is not only challenging but fresh and exciting. She also loves to write about running and invites you to visit her website at Online Running Gear dot com where you can find informative articles and detailed, well researched product reviews on P90X or running socks. Running gives the ability to have a fit and healthy body for years to come.