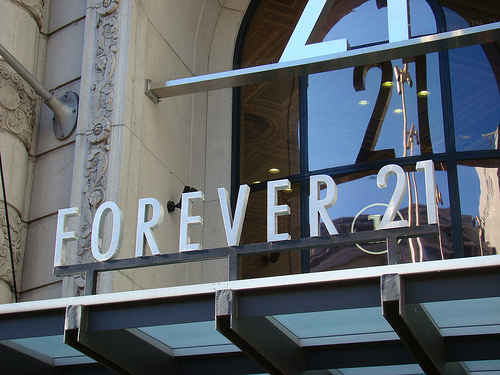 Design theft is nothing new. Brands like Urban Outfitters and Forever 21 have been accused many times of stealing designs from indie crafters and small brands. What’s different about this case of design theft is that the designers and community are speaking out!

A major problem when big brands steal designs from the little guy, beyond the obvious ethical issue, is that the small fry have very little recourse. One indie crafter or tiny company hardly has the cash handy to take on the legal teams from heavy hitters. When Forever 21 ripped off a design from Feral Childe, a pair of indie clothing designers, the community decided that enough was enough.

What they lack in legal fees, they’re making up for with voices, and you can help! Over 3000 people have signed the Change.org petition demanding that Forever 21 stop selling this copied design. Feral Childe also started legal proceedings against Forever 21 over the stolen designs after Forever 21 denied stealing from them and even suggested that Feral Childe had copied the design from someone else!

I’ve got to say that as an indie designer, it makes me crazy when big companies rip off the little guy. There’s really very little that we can do to protect ourselves, and it’s really heartening to see the design community and consumers pulling together to tell Forever 21 that they don’t condone this practice.

Have you run across other instances of design theft, either from Forever 21 or another big retailer? Sound off in the comments!