Far from being a frivolous fashion holiday, Fashion Revolution Day on April 24th encouraged fashionistas (and consumers in general) to ask, “who made my clothes?” 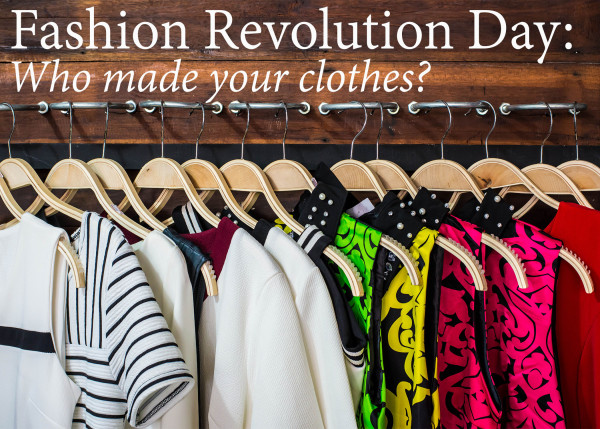 The day coincides with the Rana Plaza factory collapse that occurred two years ago and killed more than 1,000 people. If you need a refresher, Rana Plaza was a garment factory in Dhaka, Bangladesh that collapsed due to a structural failure. Not only was it the deadliest garment factory incident in history, but news at the time of the disaster reported it was also the deadliest accidental structural failure in modern times.

People were quick to blame the fast fashion movement (yes, that’s the sartorial equivalent of fast food), and rightfully so; the movement pressures overseas factories to produce more units in less time. Garment factories overseas (read: sweatshops) are notoriously cramped and full of young workers who make mere pennies per day (and they work some long days)!

Fashion Revolution Day aims to promote the slow fashion movement. It’s the driving force behind artisan-made textiles and accessories that are pretty, unique, and eco-conscious. Sounds like a fair tradeoff to me! Rather than snatching up that cheap faux-designer blouse that everyone will have, Fashion Revolution Day wants to inspire consumers to shop consciously, and buy something unique.

One of the easiest ways to do this is by intentionally seeking out fair trade goods, both clothing and otherwise. Fair trade just means the workers who made the items were compensated fairly for their work, and they made the item in safe, sanitary working conditions. Now, this should be the norm, but since it’s not, just look for the fair trade label! A lot of companies now know that some consumers are concerned with the rights of overseas laborers, so they usually try to make it clear on the label or the tag that the item is certified fair trade.

Something that has happened a few times in recent years calls attention to why we need more fair trade factories in the fashion industry- some sweatshop workers have actually left notes in some of the clothes that they make. They’ve been sewn into the fabric or left in pockets, and they all levy the same accusations against sweatshop working conditions: that the environment is unsafe, unsanitary, and unreasonable for the amount of time they spend there.

Just last year, British shoppers found notes sewn into dresses at a popular outlet store. The letters were allegedly written by Chinese prisoners who worked in garment factories for 15 hours each day.

This blogger who used to work in the labor industry would audit the reports of overseas factories, and her account of what went on at those factories is a bit grotesque (although not really surprising). She talks about the long hours people are forced to work, but she also points to some disturbing facts. One of her most troubling findings wasn’t the rodent infestations or health hazards, but that factory owners often chained the doors shut during working hours, and either blocked off fire exits, or had fire exits that were too flimsy to withstand the weight of fleeing people. So just like in the Rana Plaza collapse, if workers actually needed to leave the building in an emergency, they aren’t actually able to do so.

Stories like this always leave me wondering- is it really worth it? Is it worth someone else risking their health and life just so we can all get cheap clothes that look super trendy? Of course not, especially when the poor quality of said garments will cause them to fall apart after a few washes!

Fashion Revolution Day is shedding some light into the dark corners of this fast fashion industry, asking consumers to look a little deeper into who makes their clothes.

But it’s not just the off-brand labels that are guilty here. A couple of years ago, designer Alexander Wang was sued by two former employees who claimed they were forced to work for the label under sweatshop conditions right here in New York’s Chinatown. However, the charges have since been dismissed. The point is that just because you pay more for an item, doesn’t mean the workers who made it were fairly compensated!

The only way to know for sure is to check out the label. When Fashion Revolution Day encourages fashionistas everywhere to ask who made their clothes, it should at least inspire some curiosity. (Confession: after a cursory view into my own closet, I have items made from Los Angeles to the Philippines… and yes… Bangladesh too.) But like I mentioned previously, most labels that are fair trade certified are pretty eager to let you know that what you’re buying is legit!

On a slightly more positive note, the letters mentioned above shocked the people found them, and prompted them to become more conscious of what they buy. It made them think about who made their clothes!

But of course, it shouldn’t take a huge disaster like Rana Plaza or a shock like a sweatshop worker’s note to inspire us to change our ways and start shopping consciously.

In my view, if more people saw that fair trade fashion was just as chic as fast fashion, maybe we wouldn’t have sweatshops at all any more! It’s just a matter of making those labels and items more mainstream. Right now, it’s a bit of a hunt to find fair trade, eco-conscious items that are also modern and cute.

Thankfully, there are a lot of brands and e-commerce sites out there trying to change that! Sites like Zady, Modavanti, and Asos’ Green Edit aim to bring eco-fashion to interested consumers.

And once you start looking for fair trade clothing and accessories, you realize there’s a lot of cool stuff out there. Especially when it comes to statement jewelry, would you rather have a plain pair of gold earrings from a mall brand, or these cool earrings made by Ethiopian artisans out of bullet casings?! Sometimes, fair trade items make for better conversation starters!

Hopefully, this inspires you to have a look in your closet and see where your clothes were made. Here’s to making better, fairer, purchases in the future!

[Photo of clothing rack via Shutterstock]