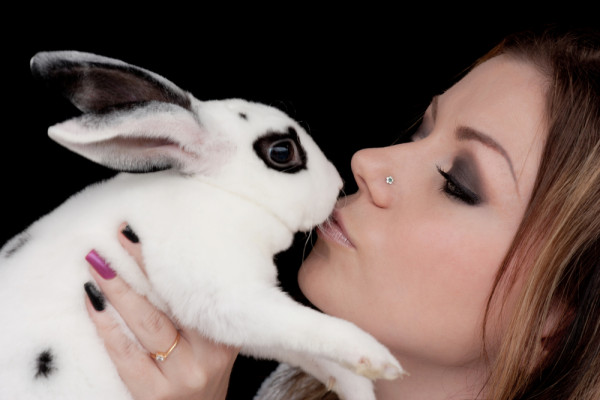 March is going to be a great month for animals. Beginning on March 11, any cosmetics containing animal-tested ingredients will be banned in the European Union!

The ban is the culmination of 20 years of debate in the EU, and it’s such a win for animal rights. As we’ve talked about here before, animal testing is not only extremely cruel, it’s unnecessary. The data scientists get from slathering lipstick on a rabbit doesn’t really tell us much about how that lipstick is going to impact a human who wears it.

What makes this ban especially powerful is that it’s not just on product testing but ingredients testing as well, and it covers testing on imports. That means that if American cosmetics-makers, for example, want to keep selling in the EU, they’ll have to ditch the cruelty, too.

The debate about animal testing has been going on for decades in the EU, and a ban has actually been in the works since 2009. It kept getting delayed and pushed back, but the new European Commissioner for Health and Consumer Policy, Tonio Borg is done with the thumb-twiddling. Here’s his official statement from the press release about the ban:

“I believe that the ban should enter into force in March 2013 as Parliament and Council have already decided. I am therefore not planning to propose a postponement or derogation to the ban. This decision also means that we need to step up our efforts in the development, validation and acceptance of alternative methods as well as in the international recognition of these methods. I know that ECEAE has been a valuable and knowledgeable partner in these areas and I count on your future support.”

Animal rights group Cruelty Free International was a big driving force behind this new legislation, and now that they’ve had a victory in the EU, they’re planning to turn their attention toward animal testing in other countries. The group’s Chief Executive Michelle Thew said:

“This is truly an historic event and the culmination of over 20 years of campaigning. Now we will apply our determination and vision on a global stage to ensure that the rest of the world follows this lead.”

It’s a little early to tell how cosmetics makers in other countries will respond to the EU animal testing ban. Will other countries stop using animal tested ingredients all together, or will they create special formulations for the EU, like we’ve seen food companies here in the states do to comply with overseas bans on genetically modified ingredients?