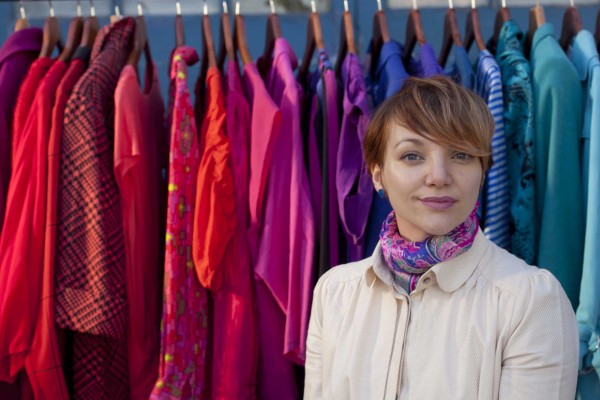 Lucy worked ten years as a stylist in fashion, props and costume for editorial, advertising, music promotion, film and personal styling, as well as lecturing for seven years in Visual and Material Culture to media, fashion, art and design students at Nottingham and Bucks New University. In the midst of her work, Lucy discovered not only the importance of aesthetic and design, but the thought behind personal style choices.

After switching her attention from how fashion is consumed to how fashion is produced, Lucy writes that she came to realize that,”with the power of looking good comes the responsibility of being good.”

Our discussion not only focused on sustainable trends and brands, but tackled some controversial topics in fur, leather, global inspiration in high fashion aesthetic, and her perspective on fair trade.

FGS: Why has it been difficult to have people make a shift into the fashion world?

LH: People aren’t willing to sacrifice the things they think are important to them…the food industry has shifted toward awareness and transparency but that’s because its actually going into people’s bodies and affecting their physical health, as in, ‘its better for me, to be more aware of the food I’m eating.’ But it’s not the same with sustainable fashion…you’re doing it for someone else. It’s an altruistic thing…it’s not for my health I’m putting this organic t-shirt on, it’s because I care for other things outside of me. And I think its much harder for people to make that connection.

FGS: Is there a growing perception of people wanting to buy sustainable fashion because they want sustainable material in their life and environment?

LH: Absolutely, every day I get new twitter followers that want to be part of this community. People are developing their consciousness and need to understand why we consume and how we consume.The two most polluting process on the planet are a result of our mass consumption. The first is factory farming of meat and the second is textile production. We have to become aware of reality of these two huge industries, and it’s going to take a while for people to wake up to the things we take for granted everyday.

FGS: How do you feel about fur, leather and other animal products? Is there any way to wear it sustainably?

LH: I don’t know a great deal about sustainable fur farming. Whatever the origins or process of the fur it’s the significance and meaning of fur that remains important…fur is a symbolic statement. I don’t think people will look at fur and think ‘oh maybe its vintage.’ They’ll see the symbolism of sex and status.   The question is If you’re wearing vintage fur or fake fur, are you still glamorizing unethical fur?

My stance isn’t fixed, if it’s vintage, if it already exists, then it seems wasteful not to wear it. It’s hard to expect people to abandon wearing fur completely. But on the other hand if the trend persists there will always be a market for future fur traders.

What I do know is that leather tannery’s are very polluting. You you can get great vegetable dyed leather. I favor new designers who use vegetable dye leather more. But again if its a vintage leather jacket then buy it – it’s there, it already exists. 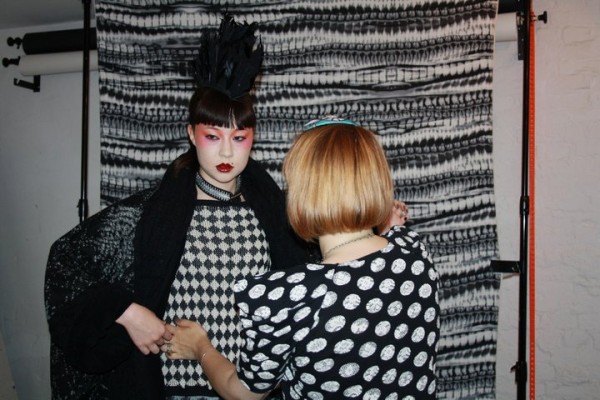 FGS: What does sustainable fashion bring to the table that maybe fashion hasn’t brought to the table – something that is not just about the process, but is also new in terms of design and quality?

LH: It’s hard to think about things in terms of being new, because creating and desiring things that are new is integral to the process of unsustainable consumption, because its always about finding the thing that’s new instead of what’s useful or necessary. Fashion is driven by a constant desire for change. What sustainable fashion brings and certain designers bring is a new way of approaching using the raw materials. Designers that upcycle, like Antiform and Goodone – are re-imagining existing materials and making then feel new. The new approach is to use discarded materials as if they were virgin materials and make them into an entirely new object or garment.  I think real sustainable fashion is having a fresh idea without starting from scratch.

FGS: I’ve heard a lot about a modern direction in sustainable fashion this year, how do you feel about that?

LH: I’m excited about it. In the past ten years I’ve seen every decade trend keep reappearing on high street…and I think this regurgitation of retro and vintage has become a bit tired and old hat. I think that the designers that want to break away from that are really forward looking. The strong designers doing this are almost sharing the original vision of modernism, a sloughing off of this clutter of old ideas and trying to create a fresh and new approach that’s forward thinking. I really like Max Jenny , Kowtow  and  the designers of Honestby for that.

FGS: What is your perspective on international sourcing and fair trade?

LH: It’s shifting in the right direction. In the past you could only by fair trade in specific gift shops. There would be tokenistic objects that didn’t really fit in the modern society they’re marketing to. It’s problematic if people are buying these token gestures purely to support these collectives of people, but not because of the design, it’s not sustainable. But designers are now collaborating with collectives and utilizing their skills . Like your pieces at Nakate – they’re re-working a simple concept and putting in this added element of design – making the pieces really desirable rather than a ‘charitable’ thing…and It works, I want a piece, I really do. For these communities to be serious players, they have to think about trends and design.

LH: A healthy economy becomes more Westernized, and that’s the worrying thing – that we’re going to countries and doing business, opening channels for trade and there’s a danger that we’re going to marginalize what’s indigenous and make it westernized so it can sell. Profit becomes more important and their culture gets forgotten about, and that’s really worrying. But, also, cultures whose economies are growing do look to the west for inspiration and do kind of adopt western culture and fashion to show that they are growing, which I think is also kind of worrying and kind of depressing. We are in danger of having an entirely homogenized planet that’s dressed in Uniqlo or something. But if you’re going to sell a non-western design in a Western market, the aesthetic has to be the perfect combination of cultures, it’s just about balance, isn’t it?

FGS: Where do you see the sustainable fashion market heading?

And, because of this new depth, I realized I could be a stylist in this world. Give me twenty different people with different aspirations and occupations who like different kinds of music and I can style all of them with sustainable fashion because the opportunity is there. It’s grown to that point and it will keep on growing.