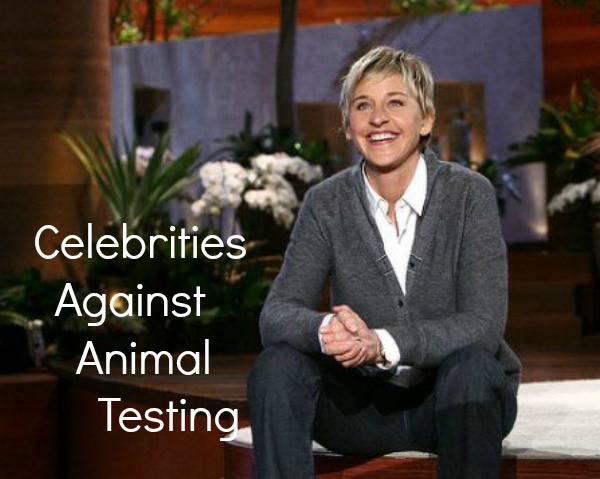 Becky’s post on a performance artist who undergoes animal testing has been getting a heaping helping of attention lately. Why now? Who knows, maybe people are feeling the love for the holidays. Perhaps some are looking for ways to give without injury to animals. Or maybe folks are interested in making charitable donations to great causes.

There are many celebrities who work to end animal testing:

Ellen DeGeneres is a huge advocate for animal rights. Check out her Pet Initiative on EllenTV where she helps to place homeless pets.

Betty White has served several animal organizations over the years.  Her 91st birthday wish?  For fans to support the Morris Animal Foundation, where she has worked for decades to provide funding to medical research and heath care for animals.

Ke$ha has spoken out against cruelty to wild animals and is said to support cruelty free cosmetics. Would love to know what’s in her beauty kit!

Kristin Bell has advocated for animal shelters and fostered animals. The House of Lies star was also spokesperson for the Helen Woodward Animal Center and received their Humane Award in 2009.

Ryan Gosling, who never seems to disappoint, wrote a call to action piece on the deplorable conditions of commercial animal food factories.

Celebrity chef Rachel Ray makes food for animals too. A portion of proceeds from her line of pet food, called Nutrish, goes to help animals in need.

We all know that animal testing sucks, but once you know what is truly being done to these poor little creatures it really breaks your heart. And animal testing in the name of beauty products is ridiculously unnecessary. There are plenty of healthy cosmetic ingredients that we know are safe. If there is concern over ingredient safety, we probably don’t want to use it on our body anyway. Right?!

Whether you are looking to lend your voice or dollars to the cause, or are simply looking to use your purchasing power by buying products made without harming indefensible creatures, read our posts from the past on animal testing.

[Image by ronpaulrevolt2008 at Flickr.com, cc]