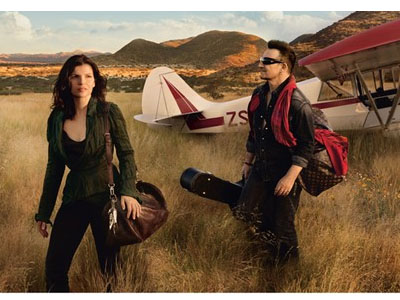 Direct from WWD Eye Scoop and written by Miles Socha: Bono and his wife Ali Hewson are starring in a new ad campaign for Louis Vuitton featuring Edun, the first time a label other than Vuitton is getting a fashion credit.

Instead of Vuitton, the two wear Edun, the ethical clothing label they founded in 2005 to encourage trade with Africa, and in which LVMH took a 49 percent stake last year. What’s more, Hewson totes a handbag co-designed by Edun and Vuitton that comes dangling with a special charm that is the French firm’s first made-in-Africa product. (It’s also sold separately.)

The image of Bono and Hewson disembarking from a small airplane in an arid South African vista — with the tag line “Every journey began in Africa” — is slated to break in mid-September in a range of daily newspapers, October magazines and on louisvuittonjourneys.com. The collaboration also will dovetail with an event during Paris Fashion Week, when Vuitton and Edun will unveil Africa Rising, a temporary exhibition of contemporary African art along with a showcase for the campaign and Edun’s spring collection. Bono and Hewson are expected to attend.

Antoine Arnault, Vuitton’s director of communications, said Edun’s presence in a Vuitton campaign would give the small brand — and its mission to eradicate poverty through sustainable enterprise in Africa — international exposure.

Posted by Emma Pezzack: www.futurenatural.com – the best organic beauty products in the world.