Chicago MSI has an exhibit on the evolution of bicycles. Check out the bike chic eye candy that I saw there!

This weekend, the family and I went out to see the recently-addd Art of the Bicycle exhibit at Chicago’s Museum of Science and Industry (Chicago MSI). Billed as an exhibit that “takes guests through the evolution of bike engineering in a beautiful gallery juxtaposing nine rare bicycles from the Museum’s collection, along with (some of) today’s most cutting-edge bikes,” the exhibit does a great job of showing cycling’s long-established history in the Windy City, and does a nice job of touching on cycling’s green benefits, without being so preachy as to turn off casual visitors.

They did a nice job, in other words.

I’ve included a few shots of Chicago MSI’s Art of the Bicycle bike chic display in the photo gallery at the top of the page, and highlighted some of my favorite examples of “newer”, “cutting edge” bikes in their own paragraphs, below. See how many you recognize from the Important Media network bike coverage at our sister sites, Gas 2 and Bikocity! 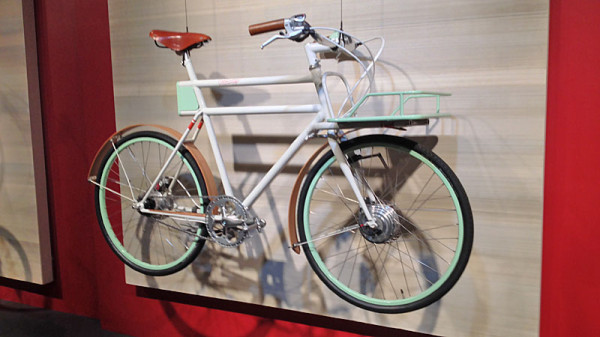 The Faraday Porteur was introduced at the Oregon Manifest bike competition (which it won) in 2012. Since then, the bike’s makers have raised more than $100,000 and started producing the e-bike in small numbers. The Farady’s electric pedal-assist system- which I covered at the bike’s debut– is good for runs between 10 and 15 miles, depending on conditions like rider weight and elevation changes. The 250W electric hub motor up front, by the way, is powered by lithium batteries which are tucked away cleverly in the bike’s double top tubes (think “laptop batteries”) and, according to the manufacturer, can be charged in around 45 minutes. 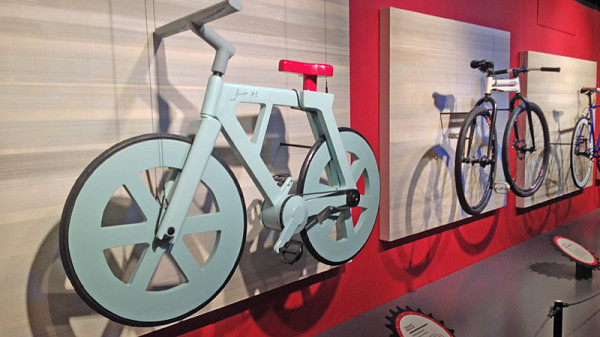 The summary on this one reads, “The fully functioning Cardboard Bicycle, created by Israeli inventor Izhar Gafni, is a one-of-a-kind prototype made for this exhibit. Despite being made of cardboard, it’s waterproof, fireproof and even has brake and pedal mechanisms made out of recyclable materials. Soon to be on the market for only $20, it could be an affordable transportation option for many,” but you already knew that because you read read this 2012 Gas 2 article. 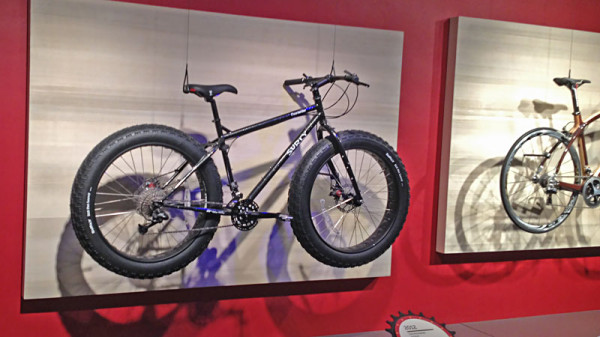 It’s not particularly fast, good-looking, or electric, but Surly’s fat-tired beach cruiser reached deep into my Florida-born soul and was easily the “most likely to get jacked off the wall” award winner of the exhibit. It may not be everyone’s cuppa, but the Surly’s overwide tires are 100% on trend.

I've been involved in motorsports and tuning since 1997, and write for a number of blogs in the Important Media network. You can find me on Twitter, Skype (jo.borras) or Google+.