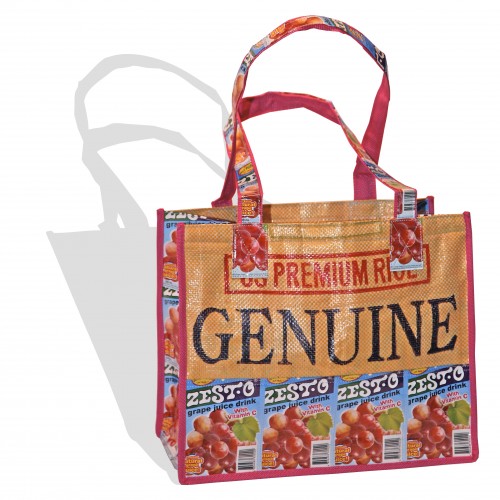 In Manila, a suburban area of the Philippines, juice containers that once littered the country-side have become a valuable commodity, not only for local business, but for the international fashion market.

Larry Duprey, the founder of Bazura Bags, said he first discovered the handmade bags on a business trip to Europe.

“A friend of mine showed me a group of bags that he pick-up while in the Philippines,” Duprey said. “Having been in the fashion accessories business for over 30 years I recognized them as a very important fashion item. I immediately contacted them and negotiated an exclusive agreement for distribution in Canada and the right to also market them in the USA.”

Since it’s launch in 2002, Duprey said that Bazura bags has grown from working with six women, to a co-op of over over 900 women, 400 of whom work on the production of bags. The co-op also provides jobs for local school children and local professional scavengers that pick up containers and sell them to the women who produce the bags.

Afterward, trash that once littered the countryside is used to create wallets, backpacks, messenger bags, totes and belts, among other items.

Duprey said that the co-op not only enables women to work as partners in a successful co-op, but to be paid on a piece by piece basis that earns them substantially more than the normal Filipino rate they would receive for their work.

“The biggest issue that I see in the Philippines is the constant absence of both Mothers and Fathers due to their overseas jobs,” Duprey said. “The Co-op allows families to remain unified and remain in the Philippines.”

Bazura Bags can be purchased online at the company’s wholesale shop.